By Maria Wiering,  Originally Published by The Catholic Spirit 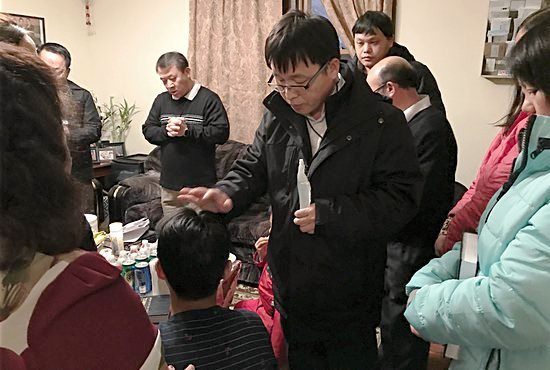 For 15 days in December, Father Berm Chakrit, a Hmong Redemptorist priest from Thailand, offered Masses, heard confessions, celebrated a baptism and anointed the sick for members of the Twin Cities’ Catholic Hmong community. The seemingly routine actions were anything but; Hmong-American Catholics rarely have the opportunity to receive the sacraments from a priest who speaks their language.

For some local Hmong Catholics, conversing with a priest in Hmong is a pleasure, but for others — especially the community’s elders ­— it’s a necessity, as they do not know enough English to confess their sins and may go years without an opportunity for the sacrament of reconciliation.

“They have many things they want to share [with a priest], but cannot share” because of the language barrier, Father Chakrit said Dec. 29, hours before leaving St. Paul to spend the New Year holiday with Hmong Catholics in Milwaukee. In August, he began a sabbatical with other Redemptorists in Chicago and spent the weekends with Hmong Catholics in Milwaukee, Green Bay and Warsaw, Wisconsin, and Raleigh, North Carolina. He left the U.S. Jan. 8 to return to his parish in Thailand.

Ordained 10 years ago, Father Chakrit, 42, said he is one of just two Hmong-speaking priests in the world who can travel to the United States. The other lives in France. Ten Hmong-speaking priests live in China and one lives in Laos, but they cannot easily leave their countries. A newly ordained Hmong priest lives in Thailand, but he only speaks Thai.

Since his ordination in 2006, Father Chakrit has traveled to the U.S. every couple of years to minister to Hmong Catholics, typically timing trips with the biennial conference of the St. Paul-based Hmong American National Catholic Association, which sponsors his travel.