In one particular parish, in one particular country, that service is, perhaps, more multi-ethnical and multi-cultural than most.  Strange as it may seem, that country is the United States, and the location is Lowell, Massachusetts, at St. Patrick’s parish in the “Acre”.

From the parish patron’s name, and the reference to the small part of land (one acre) in which the Irish lived, it is obvious that the parish, which began in 1831 and is the oldest in the city, was initially at the service of those of Irish origin who came to Lowell for work in the mills.  But, as time passed and the mills moved south and then overseas, people of other backgrounds and nationalities came to Lowell and the acre, and now, many worship in the former Irish stronghold of St. Patrick’s.

Those of Irish background make up just a small part of the English-speaking community which celebrates at 2 Masses each weekend.  A few Africans, from Nigeria and elsewhere, have recently become parish members, and there are English-speakers of other ethnic backgrounds (Polish, Portuguese, French-Canadian, etc.) who have been a part of this multi-ethnic city for generations.

The largest group is Spanish-speaking.  But, that designation hardly does justice to the rich variety of countries of origin, cultures and traditions.  There are people from a numerous South and Central 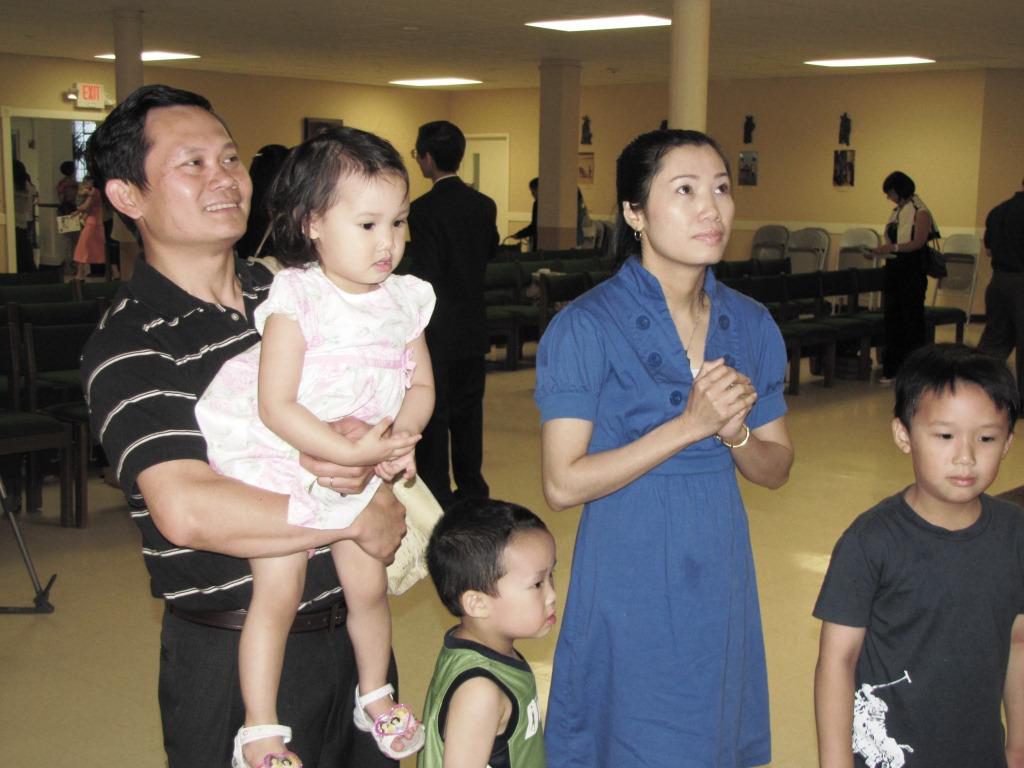 Vietnamese are just one of the ethnic faith communities served at St. Patrick’s

American countries, and the variety of celebrations is as varied as their backgrounds.

The Vietnamese community is similar in size, ministered to by a diocesan priest who resides in the rectory with the Oblate community.  There are newcomers to the city in this group, as well as those who have been here for a number of years.

The two smallest communities come from Myanmar and Cambodia, and consist up not only of those living in Lowell but also people come from neighboring cities and nearby states, to be part of the weekly celebrations.  Sometimes, they are unable to find a priest from their own country or one who speaks their language, and so they celebrate in English with the readings and music in their native tongue.

An essential complement to the parish ministry is the dedication of the Sisters of Notre Dame of Namur to the children of the city.  First during 150 years of their conducting the school under parish auspices, and now as St. Patrick’s School and Education Center, the sisters provide instruction to elementary school children of many different backgrounds, often with a student body representing as many as eight different languages and cultures.

The more recent presence of religious women is provided by the Missionary Sisters of the Blessed Sacrament and Mary Immaculate, three of whom provide religious education and pastoral ministry in one way or another to members of all the various groups.

St. Patrick’s is a busy parish, seven days a week and often from dawn to dark and beyond.  It continues the more than 150 years of service by the Oblates of Mary Immaculate to the people of Lowell and the surrounding area.