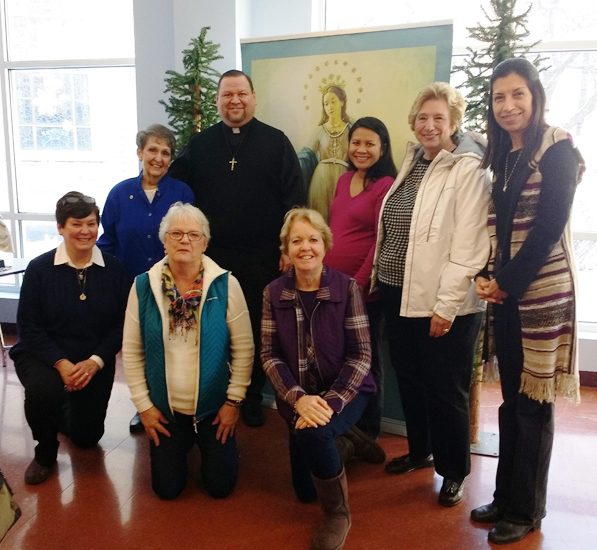 Fr. David Uribe, OMI with members of The Militia of the Immaculata in Kansas City

KANSAS CITY — St. Maximilian was born Raymond Kolbe in Poland, Jan. 8, 1894. His deep devotion to the Blessed Virgin began when he was very young. In 1910, he entered the Conventual Franciscan Order and was sent to study in Rome where he was ordained a priest in 1918.

While studying for the priesthood, he and a group of friars who were also devoted to Mary, wanted to establish a prayer group centered on Mary and her Son to combat sin and evil. The Militia of the Immaculata began in Rome on Oct. 16, 1917, around a table at the Conventual Franciscan seminary. Maximilian Kolbe sat down with six like-minded young friars before a statue of the Blessed Virgin, and after discussion drafted a charter that would establish one of the most influential Marian apostolates. The charter still serves as a blueprint of spiritual progress for Immaculata members today. Since these humble beginnings, the MI has spread throughout the world and is today present on five continents and in forty-six nations. Official membership now nears four million. Father Maximilian returned to Poland in 1919 and began spreading his Militia of the Immaculata movement of Marian consecration. In 1927, he established an evangelization center near Warsaw called Niepokalanów, the “City of the Immaculate.” By 1939, the City had expanded from eighteen Franciscan friars to nearly 900, making it the largest Catholic religious house in the world.

Wanting to “win the world for the Immaculata,” the friars utilized the most modern printing and administrative techniques, enabling them to publish countless catechetical and devotional tracts, a daily newspaper read by 230,000 people and a monthly magazine with a circulation of more than one million. Father Maximilian, an “apostle of the mass media,” began operating a radio station and planned to build a motion picture studio.

He wrote that, “The goal of the MI is in fact to make sure that all become saints. In all this activity, what strikes the eye most of all is its Marian thrust; this is a consequence of a precise understanding of the mission of the Immaculata.”

In 1930, he established the City of the Immaculata in Nagasaki, Japan, and began envisioning worldwide missionary centers.