Father Patrick Casey’s unique faith journey took him to Vietnam, where he rappelled out of helicopters to provide medical aid to wounded soldiers. After being ordained as a Missionary Oblate of Mary Immaculate (OMI), he served Catholic communities in Northern Minnesota and inner-city parishes in the Mid-West. Now he is the rector for the Cathedral of the Nativity of the Blessed Virgin Mary in Juneau.

Casey was born in Los Angeles, California to immigrants from Dublin. His father left Ireland as a thirteen-year-old stowaway on an American-bound freighter. After being caught, he was put to work shoveling coal. Custom officials interned him on Ellis Island until Catholic nuns arranged a home for him with a family in New Jersey. Kind acts like this by Catholic clergy would inspire Casey to join the priesthood. 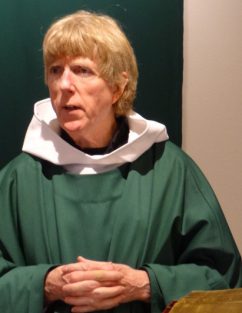 Casey’s parents met and married in New Jersey and then moved to Los Angeles where they eventually owned a group of flower and gift shops and ran a catering business. Casey and his siblings helped out in the family businesses.

During his childhood, Casey enjoyed the company of the priests and sisters that came to the family home for dinner. To repay the Daughters of Mary and Joseph who taught her children, Casey’s mother organized a drive to collect the box loads of S&H green stamps needed to buy them a new Chrysler station wagon. At the time supermarkets gave out the stamps as a reward for shopping in their stores. When his mother was very ill a priest showed her great kindness and care. So, when a recruiting priest visited his eighth grade classroom, Casey seriously considered joining the priesthood. But it would be many years before he took that step on his faith journey.
After graduating from St. Anthony’s High School in 1964, he enrolled as a freshman at UCLA with plans to be a doctor. A year later he received his draft notice.

Because he had studied science at UCLA, the Army offered Casey a place at the Officers Candidate School. He accepted and started his military service as a Lieutenant. He was assigned to the U.S. Army’s First Division in Vietnam where he worked as surgical scrub nurse in a mobile hospital unit in Anquan. The base was attacked and overrun with the help of teenage suicide bombers from China. After the battle, Casey was shocked to learn that some of the bombers were prepubescent children. Later, he transferred to the 45th Medivac Unit at Tai Nin where he worked on a medical evacuation team.