Fr. Benedicto Frías, a member of the General Formation Committee, speaks of its recent annual meeting.

Each year, the General Formation Committee meets to carry on the mission of formation in the Congregation. One could ask, “What is the work of this committee?” First of all, it is made up of a representative of each Oblate region, together with the First Assistant of the General Council; its principal task is “…to study questions relating to vocations and formation and to make recommendations to the Superior General and his Council.” (R 49b) Secondly, this committee has a consultative role in service to the Congregation; it is named by the Superior General in Council.

In order to clarify a bit the why and wherefore of this committee, I would like to share some impressions and some of the work that we did in these days at Marino, where the Mediterranean Province has a ministry with youth that has had positive results for the past 50 years. The meeting began on Monday, February 13, in the afternoon, when we gathered to celebrate the Eucharist and share a delicious supper with the Oblates of the province who work in youth ministry. The Superior General presided at the Eucharist since he had given a talk to the Oblates who had met for a day of reflection at the Youth Center in Marino. We were about 15 Oblates and five youth who make up the Marino community. 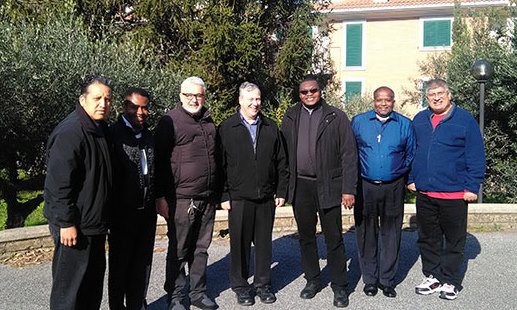 One point on our agenda was to reflect, in the light of the Acts of the Chapter, specifically on what should be done in Oblate formation and what we Oblates are invited to do in this moment in history. After each one presented a report on formation in his region, we took considerable time to reflect on the Chapter document and to make concrete proposals as to how to put into practice what the Chapter members asked the Oblates to do in formation. Just to mention a few of the items we talked about in the meeting: ongoing formation, formation to interculturality, and the program of the pre-novitiate were thoroughly discussed, with the hope that later, they will be very important items to be dealt with in each Unit during the coming years. We all know that we are part of an international religious congregation, but the question we must ask ourselves is whether we are conscious of the need to actually be and work like a true missionary family in an intercultural way.

Pope Francis has given us a wonderful document through the Congregation for the Clergy. This document invites us, as a religious missionary family, to look at vocation as a gift from God that “obliges us to offer a serious path of formation.” The Pope wishes that this task, which consists in “caring for and promoting vocations so that they may bear mature fruits”, be an essential element of the missionary activity of the Church. As part of our task, we studied this document and were able to discover that our pre-novitiate program is not far from the mark. In this sense, we formators must work patiently and carefully for vocations in order to be able to help our formandi to be authentic disciples and missionaries of Jesus, the Good Shepherd.

Definitely one of the riches of the GFC is the possibility to reflect, to question, to propose and even to disagree among ourselves, which leads us to see together that the formation process is an essential ministry in the Congregation. Even as we are aware of the decline of vocations in some parts of the world, the ministry of formation always needs to have priority in our planning. Personally, I was delighted to discover that there is hope that ministry with youth and vocations will again be a priority in many Oblate Units.

We concluded our meeting on Monday, the 20th, with the Eucharist that we celebrated together with the community of the Youth Center in Marino. Needless to say, language was not a problem for praying, celebrating, studying, learning and working together as a team. English was the official language, but we were also able to communicate with the community, using some Romance languages such as French, Italian and Spanish.