On February 14, 2017 the first official meeting of the Young Oblates of CA-US Region Committee was held in the Provincial House of Assumption Province in Toronto, Canada. CROCUS representatives Frs. Marian GIL and Luc TARDIF facilitated this event. Young Oblates from the following Provinces were present: Fr. Remi LEPAGE – Notre-Dame-du-Cap; Fr. Daniel JANULEWICZ – Assumption; Fr. Vijay DEIVANAYAGAM – OMI Lacombe, and Fr. Juan GASPAR – US. They selected Fr. Lepage as chairman and Fr. Gaspar as secretary of this newly established committee whose role is to move forward efforts for “Discerning the future of missionary presence of the Oblates in the CA-US Region”. 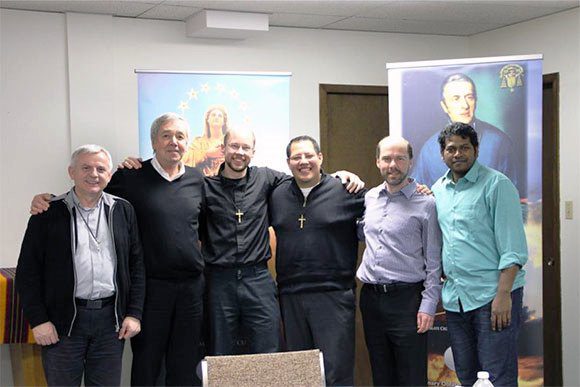 There was discussion about current ministries and Oblate formation, as well as faith sharing about one’s personal Oblate vocation. A reawakening zeal to contribute to future missionary efforts colored the meeting. The recent 36th General Chapter document and its six directives became the basis for ongoing conversation about the future of Oblate mission and missionary presence.

This permanent committee (whose membership will have a 3-year term) will embark on a yearlong process to organize a Congress for Young Oblates of CA-US Region to be held in Canada in late spring of 2018. The process to be employed at the gathering will be the SEE-JUDGE-ACT methodology. Five representatives from each province will be invited to take part in this event. Each province will host a meeting in order to allow participants to learn more about our ministries. The undercurrent feeling of this meeting was one of hopefulness and enthusiasm from all members present. (By Marian Gil, OMI – Provincial Assumption Province)