Fides Agency, 21 February 2017: Kinshasa — “There is a resurgence of fear, anger, uncertainty”, says Cardinal Laurent Monsengwo Pasinya, Archbishop of Kinshasa, capital of the Democratic Republic of Congo, in a message sent to Agenzia Fides in which he denounces the attacks against the Church in the last few days. 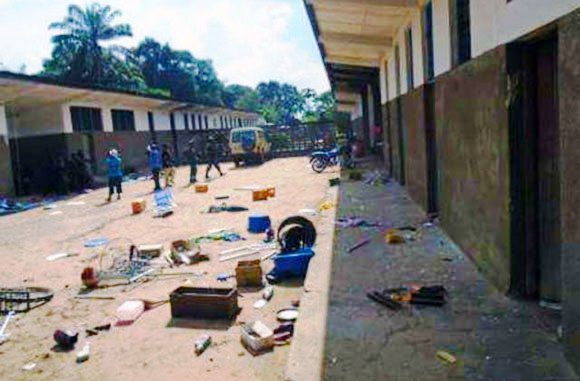 “We have learned with indignation, Saturday, February 18, of the fire in part of the Major Seminary of Malole by uncivilized people who later spread terror at the nearby Carmelite sisters in Kananga,” writes the Cardinal, who also recalls the demonstrations that occurred on three occasions in front of the Archbishopric of Kinshasa, by groups of young people who “created an atmosphere of panic”. These incidents were followed by the desecration of the parish of Saint Dominic, Limete, by a “group of about twenty spiteful young people” who “knocked over the tabernacle, looted the altar, broke benches, and tried to set fire to the church. The community of the Missionary Oblates was not spared”.

Words of an eye-witness: Father Augustin MULELE had a terrifying surprise which he recounts in an e-mail.

It was almost 6:00 a.m. on Sunday morning, February 19, 2017, when I opened the door of my room to gather some avocadoes that I had heard falling from the tree. I saw the gate of our store wide open and a group of young intruders at work before my eyes. There were five or six of them.

Was it a dream? They had bottles filled with gasoline.

–Tokotumba bino Cenco. We are going to burn you, you CENCO. (National Bishops’ Conference of Congo).

While I was trying to dialogue with them, I saw the tires of a car set on fire. I grabbed a cloth to extinguish the fire and the young men came toward me. One of them threw a bottle at me.

Then I called my confreres for help. “Father Willy, come down quickly; we are being attacked.” 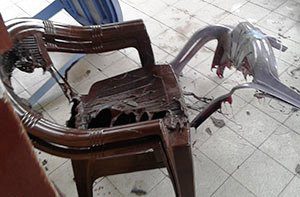 At this, the assailants fled, in sight of our neighbors.

When my confreres arrived, we got in a jeep to follow them. But we stopped and decided to go to the police. Captain Charly of the police of the communal hall received us. We went back with him so that he could examine the scene of the crime. On the way, he asked us to call instead the colonel at the Seventh Street station. We decided to go there. The colonel was not there.

The captain suggested that we go home on Zinnia (Road) but by taking a street different from the little boulevard. On our way there, I recognized some members of the group that had tried to sabotage us. They ran away.

So two of the criminals were caught on Seventh Street by the police who had been called. Both were taken to the police station at the Limete communal hall.

Having returned to our community, we were visited by three agents of the United Nations Mission for the Stabilization of Congo (MONUSCO). They reported the damage and advised us to be cautious in this time of crisis in the country and in the capital Kinshasa.

The attackers had probably come from the parish church of St. Dominic which had been desecrated a short time before. They vandalized the altar, broke the statues of the Virgin, and pushed over the tabernacle. And in the street on Sunday morning, others had pulled off the veil from a nun and pelted her with insults.