Originally Published in The Catholic Spirit

Story and Photos by Dave Hrbacek  (Re-posted with permission) 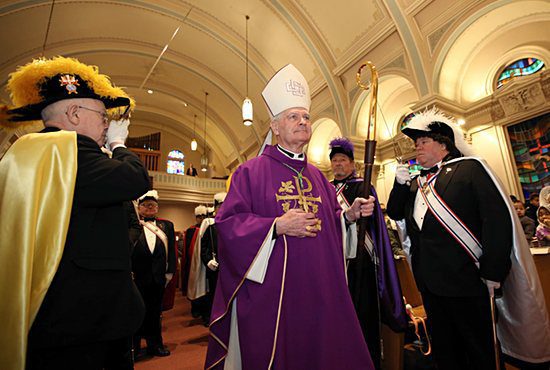 Archbishop Roger Schwietz, OMI processes in at the start of Mass March 5 at St. Casimir in St. Paul, passing through a Knights of Columbus honor guard. He concelebrated Mass with Archbishop Bernard Hebda and Father Michael Powell, the pastor of the parish. Archbishop Schwietz grew up in the parish and currently lives in Anchorage, Alaska, where he served until his retirement in November 2016. Dave Hrbacek/The Catholic Spirit

More than 100 people joined their voices March 5 to pay tribute to an archbishop who returned to his home parish to celebrate its feast day.

With a rousing rendition of the Polish song, “Sto lat,” which translates to “100 years,” parishioners at St. Casimir in St. Paul rose to their feet and showered affection upon Archbishop Roger Schwietz, OMI, the retired archbishop of Anchorage, Alaska, who returned to the parish of his upbringing to concelebrate Mass with pastor Father Michael Powell and Archbishop Bernard Hebda.

Archbishop Schwietz came to the Twin Cities to celebrate the March 4 feast of St. Casimir, plus the 100-year anniversary of the Oblates of Mary Immaculate serving the parish.

The Mass featured a four-member polka band that began with the Polish National Anthem. It likely struck a chord with Archbishop Schwietz, who owns an accordion and has demonstrated over the years his love for polka dancing.

After an upbringing immersed in Polish culture, Archbishop Schwietz became an Oblate in 1958 and was ordained a priest in Rome in 1967. The Oblates first came to the parish in 1916, when Father Andrew Stojar arrived from Winnipeg, Manitoba, to serve as pastor. The parish will celebrate its125th anniversary in December.

“It is still my spiritual home,” said Archbishop Schwietz, 76, who retired Nov. 9, 2016, but continues to serve the Archdiocese of Anchorage as the pastor of St. Andrew in Eagle River on the outskirts of Anchorage. “We lived down Jessamine Street, just a couple blocks away from church. So, I used to walk down there early in the morning and serve the 6 o’clock Mass.”

He recalled how the seeds of his priestly vocation were sown in the St. Paul East Side neighborhood, with encouragement from Father Stojar, who got to know his parishioners the way beat cops in those days  got to know the residents of the neighborhoods they patrolled — by pounding the pavement.

“I got to know him really well,” Archbishop Schwietz said. “He was well known on the whole East Side. He used to go out for walks in the neighborhood, and he would talk to people. He was a real old-fashioned pastor.”

CLICK HERE to see the rest of the story