(Fr. Pawel WYSZKOWSKI, Superior of the Ukraine Delegation, recently traveled to the war zone in that country, together with scholastic Bro. Andryi HAVLICH. Here is his story of an ongoing crisis overlooked by much of the media.) 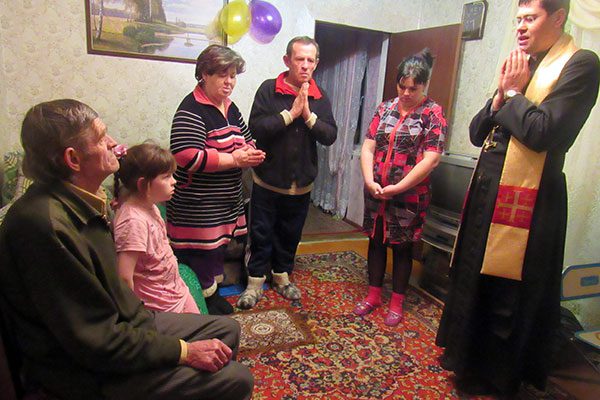 In Ukraine, for about three years, there has been war in the East. Some call it simply a “conflict”; the Western media has stopped mentioning it, but the reality deeply touches our Delegation in Ukraine and Russia, where 31 Oblates serve in 18 parishes scattered throughout the country. It is of concern to us, even though these houses are not located within the regions torn by the war with Russia. 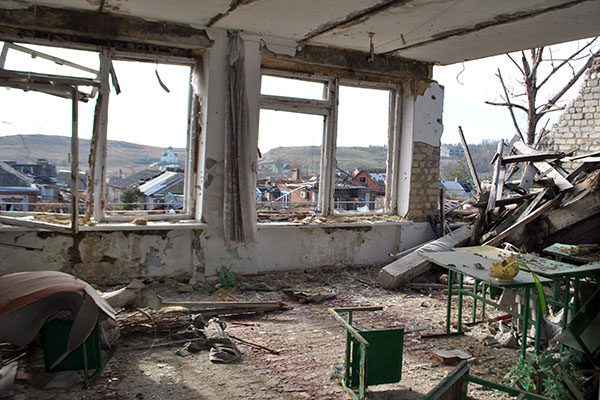 As missionaries, we cannot ignore that which affects so deeply and bitterly the people of our country and their families, nor the people in our parishes, some of whom are the refugees from the war-torn areas.

The Oblate house nearest to the war area is a community in Poltava (in the Kharkiv – Zaporizhzhia diocese). Although the distance from the battle area is about 200 kilometers, the Oblates could hear distant military helicopters, transporting dozens of the wounded to the overcrowded hospitals.

Quite recently, together with the scholastic Andryi Havlich, as part of the Christian Rescue Service, we set out for the battlefield to serve soldiers and civilians. Since it was not possible to drive 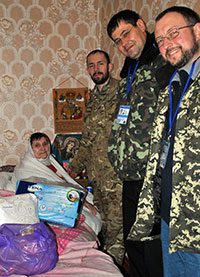 along the bombed roads, we reached the destination by train.

We could take along only the following things: personal belongings, a cassock, oil for anointing the sick, the Blessed Sacrament, bandages, and a bulletproof vest. Other items were sent by ordinary mail. We had parcels containing items for civil population (e.g. everyday necessities, medication, food, clothing, blankets, cleaning detergents). A vehicle of the Christian Rescue Service met us at the station and took us to the place of service. It should be noted that this place is located on the front line, which often comes under heavy fire.

During our week there, we travelled to several places, spending just one night in a bed, sometimes on the floor, or on the ground in a tent – “as in a war.” As a part of the pastoral ministry we had conversations, heard confessions, anointed the sick, the wounded and the dying; we celebrated the Eucharist (in huts, tents, hospital corridors, attics and when it was warm, simply in the open air).

Over the past two years the people have endured much; for more than a half year there has been neither electricity nor heating. Salaries have not been paid for a year; every day they just live “in the present” and on their lips there is only one expectation: “that at last this war will be over!” Some have suffered strokes because of the shock; others have lost their homes; others have fallen into despair that has led to alcoholism; others live in hope and anticipation of better times.

The volunteers of the Christian Rescue Service and the Christian School of Life and Evangelization provide this service to good and simple people. The volunteers are young people who have devoted their time, hearts and courage to show through the example of their own lives that the victims of war are most important to God and God will never abandon them. 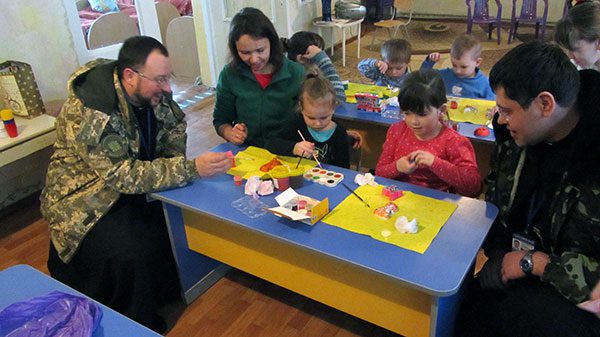 They serve children who are growing up beneath explosions of gunfire and shelling. Many of these children have spent more than one night in a cellar, hearing explosions that turned the night as white as the day. Upon hearing explosions, the children start to tremble but every new day, they have courage to leave for their kindergartens and schools.

The volunteers live in real poverty and lead a very modest life. Everything that they get from benefactors is passed on to the poor. They go there not only to bring one more type of “humanitarian aid” for the people or for the soldiers, but to bring them the Cross. Quite often our encounters are very touching. It is impressive to see the joy in the eyes of a man who has gone to confession for the first time in decades and who understands that God has found him, even under these adverse circumstances.

Many older people who lived through decades of communism during the Soviet era are unbaptized and have never been to church at all. But when spiritual help is offered to them, their emotional well-being improves; they feel safer and their stress is reduced. They are at peace, even when faced with horrors and death.

According to the United Nations, the overall number of documented deaths in the war in Donbass, which started on 6 April 2014, has been put at 9,800.