St Patrick’ Day 2017 found me in Paris to participate in a meeting of the UNIAPAC Think Tank and to offer some comments on the history of Faith Consistent Investing, comment on the intersection of Catholic Social Teaching principles and guidelines and goals like the UN Principles for Responsible Investments and the UN Sustainable Development Goals and to muse a bit on the opportunities and challenges that were on the horizon for faith based investors. The session was hosted at part of the complex of the Bank of France and close by the Louvre and the Palais Royal.

On Friday evening, after the meeting, as I walked towards a restaurant on Rue Notre-Dame de Victories I was approached by a young woman who was searching for the basilica of Notre-Dame des Victories. Seasoned traveler that I am I presumed it must be nearby and immediately pulled out my smartphone to get the precise coordinates. She looked on quizzically and was more at ease when I showed here how the basilica was identified by a blue dot on the screen. We walked together for a few minutes, made a few quick turns on the narrow streets and immediately came upon Notre Dame des Victories. 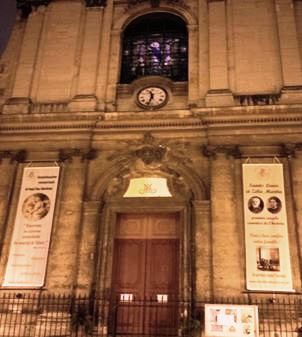 We parted and she stepped quickly toward the front entrance and disappeared. I paused for moment and as I was already late for my engagement I wondered about stopping in to see what attracted my companion. It was nearly nine o’clock in the evening and I wondered what kind of event might be taking place at that hour, a Friday night, and St Patrick’s Day at that. I assumed my friends would understand so I turned and entered.

To my surprise the basilica was full to overflowing with a very diverse congregation of mostly younger people. The atmosphere was solemn and the silence broken by the voice of someone leading the group in a solemn meditation that was interrupted by an antiphonal biblical chant. The darkness was broken by light from numerous candles and flares that were scattered throughout.

I left after a brief visit and joined my colleagues for dinner where we debriefed on the topics of the daylong meeting and discussed some of the more thought provoking aspects of the different presentations on development, gene therapy, sustainable banking and responsible investing and talked about what if any follow-up actions might be appropriately aligned with the mission of the Church in the world. With seven different nationalities represented at the table there were numerous points of view and analysis presented and discussed.

Throughout the meal I looked a few times at the little poster that described the purpose of the gathering that I had that I picked up earlier. It said that the event was organized by the “Sowers of Hope” and the question for reflection and prayer that evening was “Is it possible to love?” A very interesting and profoundly philosophical question that was being considered in the presence of the Lord. 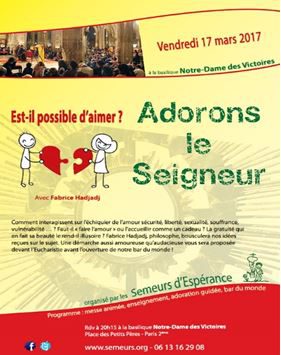 More than two hours later as I retraced my steps back in the direction of the hotel where I was staying I noticed some small groups of people gathered in front of the basilica and I decided to go back inside. Much to my surprise the church was still quite full and the readings and changings continued. I sat for a while and then noticed that the young woman who had asked for directions earlier was still setting at the end of one of the pews. Her fellow pilgrims were either seated, standing, kneeling on the floor as they participated in the worship.

This time I stayed longer and moved toward the center of the church to get a closer look. A small choir was accompanied by a solo piano player while others processed closer to the sanctuary where they joined in communal prayer or left their candles of remembrance or petition.

I left just before midnight while many pilgrims were still inside and walked slowly to my hotel. Was I really in Paris, in the capital of the eldest daughter of the Church? Was Patrick the missionary, on this third Friday of Lent, ploughing open some old furrows that would nourish the faith of the recent immigrants from numerous former colonies and distant places and at the same time rekindling the faith of these welcoming youth of Paris who were gathered together in this sacred space?

The image of that great basilica filled with so many young people late into the night in Paris gathered in prayer and to wonder about the possibility of love and where to find the seeds of hope in their lives and in today’s world remains with me. It makes me wonder about the many who are looking for reasons to hope, paths to loving relationships and increasing harmony with the earth, with strangers and migrants they have yet to meet. In a period of disruption and anxiety that is reflected in so many ways and in so many spaces may the seeker in all of us be united with those in our midst who are searching for a reason to hope and be fulfilled by the Easter experience of new life and meaning.