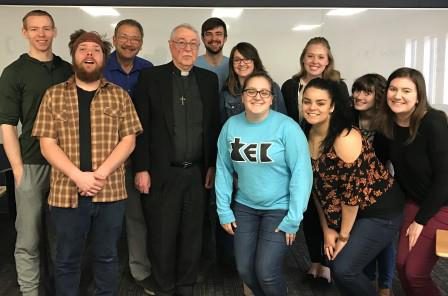 Our 36th General Chapter, in its message of Oct. 10, 2016, warned:  “We observe new forms of poverty, especially among young people:  fundamentalism, individualism, materialism, consumerism, addiction to the digital world.” After the fundamentalist caused tragedy of 9/11, Oblates working in the USA especially were affected by a great concern for Faith, Family and Fatherland. We all tilted towards fundamentalism, which builds a fortress to protect these values.

Evangelical Protestants are cousins of fundamentalist Christians, so when I was asked by my ordained friend, Dr. Bob Brenneman, from the Assembly of God Churches, to present a lecture on Roman Catholicism to his students at the two evangelical universities where he teaches World Religions, I jumped at the opportunity. Twenty students at North Central University, Minneapolis, MN on March 28, and thirty students at the University of Northwestern, St. Paul, MN, on March 30, gave me a great opportunity to meet these dynamic, mission-minded young people.  Their openness and questions fill me with hope. Most of them do short term mission work overseas during their university program.

All seemed to accept my description of the five ways of Christianity which exist within every church and religious community today: catholic, evangelical/charismatic, reformed, liberal and fundamentalist.  I could see them nod when I asked if there were fundamentalist Christians in their families or among their friends.  They accepted my observation that fundies can be insulting and hostile, especially here in the upper mid-west, where we have so many Missouri and Wisconsin Synod Lutherans.  And they agreed that when tragedy strikes, such as cancer in a family, a tornado in the neighborhood, massive lay-offs from jobs, fundamentalist Christians and other Christians need each other.  Our baptism and acceptance of Jesus as Lord and Savior can overcome the previous hurts and injuries.

The group “Evangelicals and Catholics Together for Mission,” which included Cardinal Francis George, OMI, at its very outset in 1994, shows that when we Catholics pay attention to evangelicals, we learn more, and come in contact more, with fundamentalist Christians. This in turn helps us to understand fundamentalism as a reality in every religion and culture when it is severely threatened. For more on how fundamentalism has saved Christianity several times during our history, see our Oblate website Mission-Unity-Dialogue, Five Ways page:  www.harrywinter.org