The Southern Cross, South Africa) On the weekend of March 19, crowds gathered at Durban’s Emmanuel Cathedral to pray at the newly opened shrine to Archbishop Denis HURLEY, who was

ordained bishop of Durban 70 years ago this week.

Cardinal Wilfrid Napier, Archbishop Hurley’s successor as archbishop of Durban, has given permission for a shrine and has encouraged acts of public devotion. The cardinal recently said that such devotions are the evidence that the archdiocese needs to open a cause for the canonisation of Archbishop Hurley.

Following the Catholic custom, after he died on February 13, 2004, the archbishop was buried in his own cathedral, in a grave just in front of the Lady Chapel which he loved. The shrine marks this out as a special place of prayer with a prie-dieu (or kneeler), a candle that will remain lit perpetually, and a special prayer invoking Archbishop Hurley’s example.

The date for the launch of the shrine was chosen because it was 70 years ago, on March 19, 1947 that the 31-year old Fr Denis Hurley was consecrated bishop—at the time the youngest bishop in the whole Catholic world. 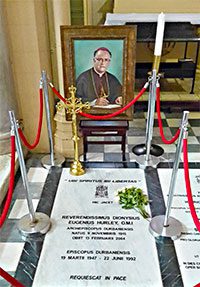 When the vicariate of Durban was elevated to the status of archdiocese in 1951, he also became the world’s youngest archbishop.

Archbishop Hurley retired in 1992 and then served as the parish priest of Emmanuel cathedral parish.

Masses were celebrated over the weekend by Mgr. Paul Nadal, who served as Archbishop Hurley’s last vicar-general, and by a number of Hurley’s fellow Oblates, including Bishop Barry WOOD, Natal provincial Fr Vusi MAZIBUKO, and Fr Chris RICHMOND, superior of Sabon House, the archbishop’s last community.

“Durban City Council has recognised Hurley’s importance with a street and now a museum dedicated to him; the Church is now formally encouraging us to pray for his intercession by the creation of this shrine. It is clear that he is an inspiration to Catholics and to all citizens,” said Hurley biographer Paddy Kearney.

Raymond Perrier, director of the Denis Hurley Centre, noted that “Pope Francis keeps reminding us that we are the ‘Church of the Poor’. Hurley’s example drives the work for the poor that continues in his name. With our prayers, and the work of the Spirit, perhaps in time he will be St. Denis of Durban, patron of the poor.”

Loving Father, we thank you for the life, vocation and ministry of your servant Denis Hurley, our bishop, brother and friend in Christ. We pray that his work for justice and peace; his loving care for the poor and marginalised; and his vision for a reformed and renewed Church, may continue to inspire us with increased vigour. Grant that the gift of the Spirit may enable us to act in harmony to establish your kingdom in our lives, our work and our world as we strive to follow Denis Hurley’s motto: “Where the Spirit is, there is freedom!” Listen kindly to the intercession of your servant Denis on our behalf, and grant us the favour of his patronage in your kingdom. We pray that in Christ your Son, all may be sanctified, all may be one. Amen.