By Sarah Moon, Originally Published by The Catholic Spirit

In 2013, Jim Reinhardt built a cabin in western Wisconsin to have an office space near southeast Minnesota, where he often works with clients who’ve been injured on a job. But Reinhardt, who attends Holy Family in St. Louis Park, also shares the cabin with family and friends, and uses it to spend quiet time with God.

“The location lends itself for peace and tranquility,” said Reinhardt, 56. “Unlike lake homes, there are no noisy boats and Ski-Doos, close neighbors or other immediate distractions.”

Another benefit of the cabin is its 10-mile proximity to St. Felix in Wabasha, where he can attend daily Mass, go to confession and pray.

Reinhardt has attended silent retreats, but decided his cabin better suits his needs. He’s found that farmland and the woods naturally draw him to silence.

“Even when I am alone on the property, it still takes self-discipline for me not to create my own noise,” he said.

But for those without a cabin or designated quiet place, silent retreats give people a space to spend time in private reflection and prayer. They might include speakers, and participants have the opportunity to meet privately for spiritual direction.

Phyllis Laing, 76, started going on silent retreats while attending St. Francis High School in Little Falls in the Diocese of St. Cloud. She usually attends three or four retreats a year and also makes time for silence during the day. 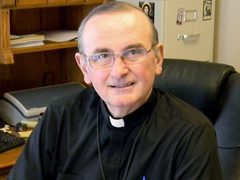 “It’s just kind of quieting myself down, learning that from going on retreat,” said Laing, who attends St. Alphonsus in Brooklyn Center. “Just saying, ‘OK, it’s just God and me time right now. Nothing else. Whatever else comes in needs to wait.’”

Silence is a virtue that requires practice, said Father Jim Deegan, a Missionary Oblate of Mary Immaculate who’s the director of Christ the King Retreat Center in Buffalo. If people are serious about prayer, they need to have a time and place to pray, because then they’re more likely to repeat it.

“Any way in which you choose to pray is good. There’s no such thing as a wrong way to pray,” Father Deegan said. “The only mistake we make in prayer is not to pray.”