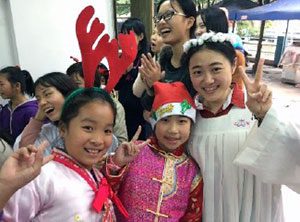 According to the China Labour Bulletin, there are an estimated 277,000,000 rural migrant workers in China. These are people who have had to leave their homes in the countryside and go to the more prosperous large cities, in search of work. Guangzhou in mainland China, located about two hours by train from Hong Kong, is one such city. It has attracted millions of poor workers from surrounding areas who come in search of work. Currently there are estimated to be approximately 5,000,000 such migrant workers in this city of 14,000,000. Some of these are single; others come with their families and live in poor areas of the city. Those who come with their children often have a problem. Because they are from the countryside, they are not registered as legal residents in the city. Though education in China is tuition-free for local residents, others must pay for tuition.

The Oblates serving in Guangzhou have over the years become familiar with a small weekday program sponsored by a group of religious sisters to care for pre-school migrant children while their parents are at work. The Oblates have provided spiritual and moral support for this initiative over the years. We have now been requested to begin a program for elementary and middle-school students, on weekends, to provide them a place to study and complete their homework. 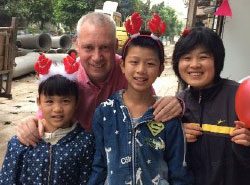 Young people from our Oblate Youth China group have already been coming for several months to volunteer their services. To this end, the mission in Guangzhou has recently rented a small storefront to serve as a study and activity centre for the children of the migrant families. The centre, called “Angel’s Love” was officially opened last Christmas Day with a party for the migrants and local children. Twenty-seven participated and enjoyed the Christmas drama, games and refreshments that the 25 young adults provided for the occasion. (Cosmic, March 2017)