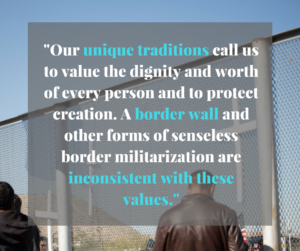 About eighty national and state groups from various faith traditions issued a letter asking Congress to stand against any funding for a border wall or other forms of border militarization. “We stand against a wall because our faith communities have ministries and relationships deeply rooted in border communities and through these relationships, we’ve found that walls do not deter migration, they are an ineffective and immoral use of public funds, they hurt communities, businesses, and landowners in the border region, they increase risk of flooding and cause other environmental harms, and they infringe on the rights of indigenous communities.” The Missionary Oblates of Mary Immaculate JPIC joined other faith-based organizations in endorsing and signing the letter.