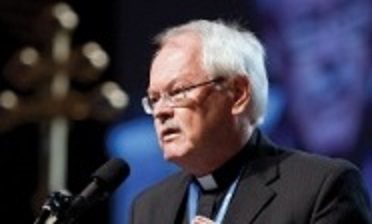 CHICAGO – Catholic Theological Union (CTU) will present an honorary doctorate in theology to the Rev. Ronald Rolheiser, OMI, at the school’s 49th annual commencement ceremony on May 11. Honorary degrees are conferred annually by the faculty and Board of Trustees upon individuals whose contributions to the fields of scholarship and service reflect the values to which Catholic Theological Union is committed.

Rolheiser is a member of the Missionary Oblates of Mary Immaculate, and he has served as President of the Oblate School of Theology in San Antonio, Texas, since 2005. CTU will honor Rolheiser for his significant contributions to the world Church in the fields of contemporary spirituality, theology, and adult Christian faith. His focus on human experiences appeals to a wide spectrum of theological views and life experiences.

Rolheiser is a distinguished writer and is recognized nationally and internationally as an author, lecturer, retreat director, educator, and spiritual advisor. Since 1982, he has written a weekly column on theological, church, and secular issues that is carried by more than 80 newspapers worldwide. His book, Sacred Fire – A Vision for A Deeper Human and Christian Maturity won Book of the Year and Best Book in Spirituality in 2015 from Catholic Book Awards.

Rolheiser previously taught theology and philosophy at Newman Theological College in Edmonton, Alberta, served as Provincial Superior of his Oblate community in Western Canada, and was a member of the General Administration for the Oblates in Rome.  He received a licentiate and doctoral degree from the University of Louvain in Belgium.

At the commencement ceremony, CTU will also present an honorary doctorate in ministry to Sister Simone Campbell, SSS. A renowned social justice advocate who lobbies on issues of peace-building, immigration reform, healthcare, and economic justice, Campbell is the Executive Director of NETWORK Lobby for Catholic Social Justice and the organizer of the “Nuns on the Bus” tours. She is a member of the Sisters of Social Service, whose ministries address issues of social justice with a focus on women, children, and families.

About Catholic Theological Union: CTU is a Roman Catholic graduate school of theology and ministry. Its mission is to prepare effective leaders for the Church, ready to witness to Christ’s good news of justice, love, and peace. CTU’s 4,000 lay and vowed religious graduates are serving in 60 countries worldwide.