Photos and story by Will Shaw with Thanks to Bette Meyer, Victorious Missionaries Ministry Assistant 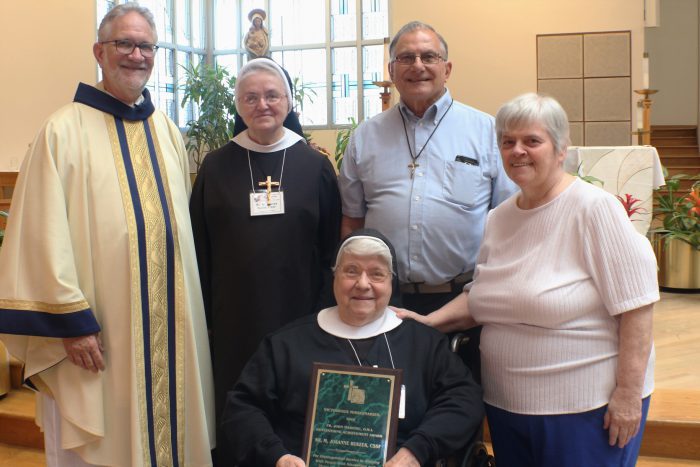 The Victorious Missionaries held their National Conference May 5-7, 2017 at the National Shrine of Our Lady of the Snows in Belleville, Illinois.

Delegates from four of the six U.S. Chapters of the Victorious Missionaries were in attendance representing the cities of: San Antonio, Texas, Erie, Pennsylvania, Buffalo, New York, and Belleville, Illinois.

The agenda for the gathering included a Friday night business meeting and a day of reflection led by Sr. Carla Mae Streeter, OP on Saturday. The day also included a reconciliation service.

On Sunday the Fr. John Maronic, OMI Award was presented at a special Mass celebrated by the U.S. Oblate Provincial, the Very Rev. William Antone, OMI. The John Maronic, OMI Outstanding Achievement Award  is presented for “Distinguished Service in Ministry with people with disabilities and those who share the journey.”  The recipients of the award must have demonstrated a commitment to the Gospel values represented in the Mission Statement of the Victorious Missionaries:

“We, the members of the Victorious Missionaries, commit and dedicate ourselves to offer to God and to each other our giftedness, our visions and our dreams. We will create and foster an atmosphere where all members are encouraged and empowered to come to a deeper understanding of the call to live out of our Gospel Values, and bring God’s message of love to all people.”

After Mass the group retired to the Shrine Restaurant for a hearty breakfast buffet before returning home.

The Victorious Missionaries are people dedicated to providing spiritual support for all those with disabilities or who are chronically ill and those who wish to journey with them. They are a diverse group – comprised of laity and religious, women and men, the young and the not so young. They are a visionary people called to live a life of hope; called to see past the struggles of life to the victory that is born through the spirit of love. The VM organization was founded by the late Fr. John Maronic, OMI, in 1964. It was the first movement that was formed by and run by persons with disabilities. Today, the VMs have six chapters throughout the United States.

Photo of all the 2017 National Conference attendees