Originally Published by the Council for Research in Values and Philosophy 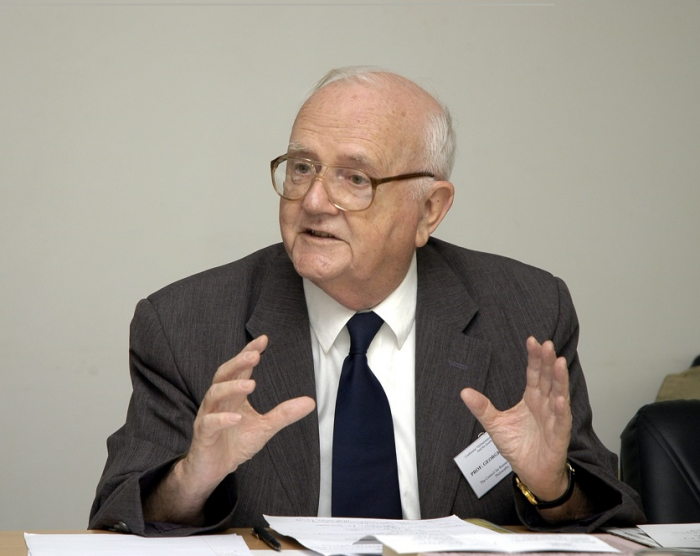 George F. McLean, Founding President, The Council for Research in Values and Philosophy (RVP), and Founding Director, The CUA Center for the Study of Culture and Values (CSCV now MCSCV), was Professor of Metaphysics, School of Philosophy, The Catholic University of America (CUA).

Yet this expresses only a small part of who he was. Over the years, Professor McLean was a scholar and a teacher, but most importantly he worked to democratize philosophy ­ promoting the research of philosophers coming from many different cultural traditions and publishing the academic work of teams of scholars from countries and regions around the globe in order to enhance the interchange of philosophical insight.

George Francis McLean was born on 29 June 1929 to a Scottish-Irish Catholic family. His great grandparents on both sides of his family came to the United States from Ireland 150 years ago. He grew up in Lowell , Massachusetts , the earliest developed industrial community in the United States . George F. McLean was the second youngest of five children (three boys and two girls).  At the age of eleven, he made up his mind to join what he referred to as his “family” – the Oblates of Mary Immaculate (OMI), a Catholic missionary community founded by Eugene de Mazenod, a French priest. Its chief mission is to help the poor, the neglected and the abandoned across the world. After high school, McLean went to Newburgh , New York , to begin college.

In 1949 McLean was sent to Rome for studies at the Gregorian University where he remained there for seven years, three years of philosophy and four of theology. This was a mind-opening experience for the young student by living with 100 scholars from 20 different countries. In 1955 McLean was ordained an Oblate priest, and in 1956 he was called back to the United States to pursue a doctorate in philosophy at The Catholic University of America (CUA) in Washington, D.C..  In 1958 McLean finished his doctorate with a dissertation on Paul Tillich and began teaching at The Catholic University of America (CUA) as well as at Oblate College.  In 1960 McLean was asked by the CUA School of Philosophy to organize a summer workshop for philosophy professors across the country, which he did annually until 1968.

Because of the success of the workshops, Professor McLean was asked by Professor James A. Weisheipl, O.P., the President of the American Catholic Philosophical Association (ACPA), to serve as its Secretary, a position he held for fifteen years (1965-1980). In 1968 Professor McLean went to Vienna to attend the World Congress of Philosophy. There began his involvement with the work of International Federation of Philosophical Societies (FISP). From 1978 to 1988 McLean served its Board, developing policies for the World Congresses of Philosophy and other philosophical meetings sponsored by FISP.

In 1974, Professor H.D. Lewis of King’s College ( London ) and President of the International Society for Metaphysics (ISM), appointed Professor McLean Secretary General of that organization. In the same year he began his service as the Secretary General of the World Union of Catholic Philosophical Societies (WUCPS) (with Professor Carlo Giacon of Italy , the Director of the Enciclopedia Filosofica as President). Professor McLean held both of these positions from 1974 to 1998. In the following year, 1975, he participated in founding as the first Secretary of The Inter-university Committee on Research and Policy Studies (ICR) and The Joint-Committee of Catholic Learned Societies and Scholars (CLS).

One of the first steps of Professor McLean’s international activity was his initiation of a series of conferences, beginning in 1976, sponsored by the International Society for Metaphysics (ISM). These conferences took place in major University centers around the world ­ Shantiniketan ( India ), New York , Jerusalem , Bogota ( Columbia ), Nairobi , and other locales ­ on the themes of the human person, society, and culture. Some of the conference papers presented at those meetings were later published by the Council for Research in Values and Philosophy (RVP).

In the early 1970s Professor McLean began to work with philosophers in Latin America, especially in the countries along the Andes . A series of colloquia on moral education were held in Mexico , Colombia , Ecuador , Venezuela , Peru , and Brazil . Within a few years this initiative had extended to virtually all the countries of Central and South America.

CLICK HERE to see the rest of the article