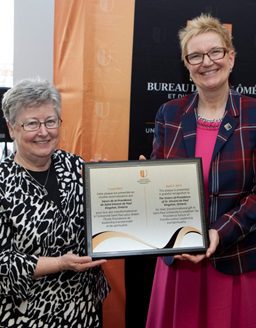 On Friday April 7, 2017, the Providence Sisters of Saint Vincent de Paul, Kingston, Ontario, made a legacy gift of $2.5M to Saint Paul University to establish the Providence School of Transformative Leadership and Spirituality.

Saint Paul University, founded by the Oblates, had identified the need for leaders to integrate into their professional practice the values of social justice, enhanced human development, sustainability, diversity and inclusion.

Over the past 156 years this religious congregation of Sisters has been dedicated to serving with compassion and trusting in Providence. From the four sisters who arrived from Montreal in 1861 to care for the poor, the aged and the orphans in Kingston, they have expanded their ministry to found orphanages, schools, hospitals, long-term care homes and hostels across Canada. In the 1967 they began ministry in Guatemala and Peru. The Oblates of Mary Immaculate had also arrived to minister in Peru in the 1960’s. One of the Oblates they met and worked with there was Brother Leonardo REGO. What a fortuitous meeting that ended up being!

Brother Len is the director of JPIC for the OMI Lacombe Province and currently holds the position of Oblate in Residence at Saint Paul University. From his long acquaintance with themhe is very familiar with the Providence Sisters’ vision and how they want to prepare future leaders with the knowledge and skills they will need to meet the challenges of our ever changing world.

Brother Len saw the potential connection between what Saint Paul University wanted to achieve and what he heard from the Providence Sisters regarding a future-focused legacy that reflected their mission and values. After numerous discussions between the Sisters and the team at Saint Paul University, it was determined that that was a good fit.

The official ceremony on April 7 was a touching celebration of these remarkable, dedicated and most generous Sisters and a grateful academic institution that has now launched this new department: the Providence School of Transformative Leadership and Spirituality. (Erin Ryan, Oblate Associate)