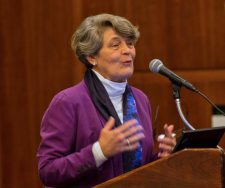 NEW YORK (RNS) Sister Patricia Daly is a Dominican nun who has been lobbying corporations to be socially responsible for so long that she has a rich trove of stories about battling recalcitrant execs and pushing faith-based resolutions at shareholder meetings.

But one of her favorites dates from just a few years ago when she was at a conference on human trafficking and an official from General Electric addressed the gathering.

“For many years if anyone from General Electric would see Sister Pat on the streets of New York they would cross the street to avoid her,” the GE executive recalled. “Today, I knew she was going to be here and I looked for her at breakfast.”

That story, said Daly – now emeritus director of the New Jersey-based Tri-State Coalition for Responsible Investment – is indicative of the sea change in relations between the corporate world and faith-based groups like hers that in the 1970s spearheaded the movement for socially responsible investing.

“Today we have a really great working relationship, and I think we can say that about more companies than not,” Daly said. “We are trusted at the table.”

Critical to the success of the movement is the fact that corporations are not simply tolerating activists such as Daly.

Instead, they increasingly see the socially responsible agenda as good business; and, perhaps more important, so do investment firms that are responding to the growing demand for portfolios that reflect a client’s values while also making money as effectively as any other investment.

That’s why Daly was relating her story in a conference room in the Bank of America headquarters in midtown Manhattan as part of a recent two-day meeting organized by the banking giant’s wealth management division, Merrill Lynch.

The goal of the Faith Consistent Investing Forum was to bring together “practitioners” in the field – members of faith-based organizations charged with implementing an investment portfolio that reflects an organization’s faith or values – as well as financial professionals who wanted to learn more about the growing socially responsible investing, or SRI, sector.

Among the 60 participants were Daly’s Tri-State Coalition, the largest of the Catholic organizations providing guidance for those who want to avoid investing in companies that produce certain products, as well as the Interfaith Center on Corporate Responsibility, or ICCR.

The ICCR is widely viewed as the foundation stone of the movement that began in the 1960s in response to rising anger over companies that made big money off tobacco, or infant formula marketed to poor mothers in the developing world, or the defoliant Agent Orange that was widely used in Vietnam.

Apartheid was a central mobilizing cause back then, and a shareholder resolution filed on behalf of the Episcopal Church in 1971 calling on General Motors to divest from South Africa over the system of racial segregation is considered the birth of the ICCR, and the faith-based or socially responsible investing movement.

Today the movement has broadened significantly and the issues have changed: Now climate change, trafficked labor, sustainability, handguns, gender equality and racial diversity are chief concerns, and this generation is even more aware of how the world works.

They also understand that while calls for boycotts and divestment can garner headlines and stir public emotions, the “inside game” of putting investment money where it reflects an organization’s values can push change more effectively than consumer spending habits – where and what products to buy, or not to buy.

“The public is looking for leverage somewhere,” the Rev. Seamus Finn, a Catholic priest who chairs the ICCR, told the gathering during a panel on portfolio screening. “I think they have largely given up on the political class at the moment.” 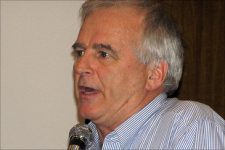 The business world, however, remains responsive to the ebb and flow of capital.

That’s why religious groups and faith-based organizations are careful where and how they invest the billions of dollars in pension funds and other reserves at their disposal. And why they use those funds to try to influence businesses.

Indeed, many major investment firms have offices that can cater to the wishes of religiously committed clients. At the same time, secular investors are increasingly concerned about matching their portfolios with their values — values that often overlap those of faith-based investors, giving added heft to the socially responsible investing movement.

That dynamic is in fact keeping issues such as climate change and human trafficking at the forefront of the corporate and financial industry’s agenda “even if Washington seems to be asleep for a while,” as Finn said, referring to the expected retreat from those issues under the Trump administration.

“When we do this right it can change policies more than politics ever can,” agreed Steve Samuels, a Merrill Lynch managing director who shared the dais with Finn.

James Ryan, a longtime Merrill Lynch investment adviser who for years has been offering faith-based investment options for Catholic institutions and clients, organized the Faith Consistent Investing Forum and outlined the three main approaches to the issue:

Screening for “sin stocks”: This approach identifies companies that produce goods and services – such as tobacco or abortifacients — that an investor finds objectionable.

Screening remains a simple and popular way to invest with a clean conscience and it is the main approach for many faith-based investment houses that have started in recent decades to enable evangelical Protestants, Lutherans, Roman Catholics and other believers to put their money where their values are. “Biblically responsible investing,” or BRI as some call it, is another moniker.

Shareholder advocacy: This is the strategy that gave birth to the movement – and focuses on using leverage as a stockholder to try to change the policies of a particular company from within.

Impact investing: This is the newest approach and it basically means investing in companies or bonds that do the kinds of things values-based groups like – producing solar energy or providing good health benefits to employees – so that those companies will flourish and have a ripple effect on society and on the business world that pays attention to successful models.

“So you screen out the bad guys, you try to have a positive influence on the companies that you do own, but now you look for opportunities that you might want to invest in,” as Ryan explained.

This is a new dynamic and a developing model, one that both businesses and faith groups are still trying to figure out. Reports say that impact investing has drawn upward of $40 billion in investments from pension funds, endowments and private portfolios, though that’s still well below the initial, far more optimistic projections for this sector from a few years ago.

But the trend lines seem clear:

“The world is rushing in your direction,” Andrew Sieg, head of Merrill Lynch Wealth Management for Bank of America, told the gathering. “It’s not a leap to say that this is a transformative moment in how capital is being intermediated,” he added.

Sieg – who was highlighted in a 2015 column on impact investing by New York Times columnist David Brooks – noted that the change has been driven not by institutional investors but by changing mores.

“The baby boom generation sees the world in a very different way than the World War II generation, and millennials even more so,” he said. The younger generation of investors and consumers “don’t see their portfolios in a vacuum anymore apart from their values and the world they live in,” he said.

A case in point is the grandson of investment guru Warren Buffett who two years ago launched a firm to “invest in early-stage and undervalued companies that are working on issues such as clean energy, sustainable agriculture and water scarcity,” as The New York Times wrote.

“I’m looking for that sweet spot,” Howard Buffett said. “How do we improve society through these investments? How can we be creative with capital to address some of the greatest human needs?”

But many challenges remain. While some organizations dedicated to socially responsible investing have been drawing growing numbers of clients, traditional financial houses are still lagging.

“The conventional wisdom is that impact investing is not real investing,” Sieg said. When many investment advisers get requests for socially responsible investment alternatives from clients, “their first instinct – and I’m going to be very candid – is to put their hands over their ears and pretend this isn’t occurring because it’s a different wavelength from the way they’ve thought their entire careers. That’s not possible any more for us.”

As Sieg and others noted, impact investing and socially responsible investing are proving to be as profitable as other kinds of investing.

“The idea that your portfolio was going to take a hit if it was socially responsible, that died 20 years ago,” said Daly. “All the business schools have given us evidence that companies that have operated with some kind of sustainability metrics have outperformed their peers.”

But it’s still hard to convince everyone – even within religious communities – that you can do well while doing good.

Meredith Jenkins was hired two years ago as chief investment officer for Trinity Wall Street, an Episcopal parish in downtown Manhattan with some $5 billion in real estate and stock holdings.

Jenkins told the Bank of America forum that she was trying to persuade the vestry committee to take a “much more holistic view” of how it invests and to see “integrity” in its investments as a core value.

Similarly, Catholic dioceses and universities tend to do the bare minimum when it comes to investing, generally opting for screening out offending companies rather than taking an active role in trying to use the billions of dollars in pension and other investment funds to try to affect companies or push the market in a particular direction.

Finn said there are also efforts to try to give greater depth and breadth to the SRI movement by bringing more religious communities on board.

The faith-based investing movement continues to be led by Christian churches and groups, though there are some Jewish groups and even a Buddhist organization. An international conference in Switzerland this fall, sponsored by the Alliance of Religions and Conservation, will aim to draw a broader array of faiths to work together on faith-based investing.

But as Finn noted, religious traditions such as Islam often don’t have a single authority or set of guidelines to provide a road map on these issues.

So what is the role for faith-based activists and investment firms going forward? As Daly said, “We opened the door for a lot of different voices.”

But even as private for-profit investment firms increase their efforts on SRI and impact investing, and even as ethical investing becomes a priority for younger generations less tethered to religious life, faith-based groups can continue to provide guidance and services for investors by identifying issues of concern.

Finn argued they can also be critical in connecting the financial industries of the West with countries in the developing world that are suspicious of economic giants like the U.S., even as they see America cutting invaluable development aid to their regions.

Someone needs to make the case that private finance can successfully invest in places that have a desperate need for basic infrastructure, now more than ever, Finn said —and to argue that such an investment is a good move even if the returns aren’t as obvious and immediate.

“Where is the capital going to come from that is going to build the roads or build the schools, or provide access to basic needs?” Finn told the conference. “I think that’s a place where faith-based groups can continue to push the envelope in trying to come up with new metrics.”