The Oblate Mission in Venezuela depends upon the Mediterranean Province. The Provincial, Father Alberto GNEMMI, has asked for prayers for the peaceful resolution of the grave political and humanitarian situation that exists in that country.

For almost two months now, Venezuela has been in the news because of the ongoing confrontation between the population, which has taken to the streets to protest against the serious socio-economic crisis that has been impoverishing the country for years, and the military forces that clearly support the government of the president. The conflict between the sides, which has become dramatic in recent weeks because of the lack of food, has already caused about fifty deaths. 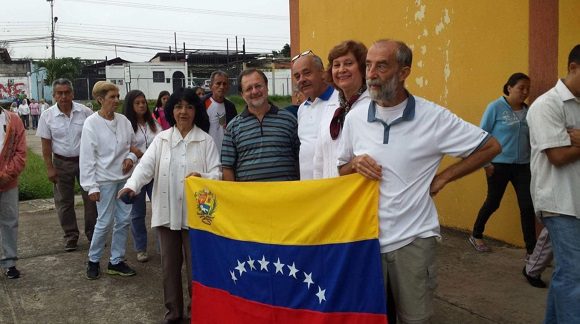 The grave situation touches us closely, since in Venezuela, the Oblates live in three areas of the country: Bishop Ramiro DÍAZ, Fr. José Manuel CICUÉNDEZ and Fr. Nené TASAR in Catia la Mar, about thirty kilometers from the capital, Caracas; Fr. Javier ÁLVAREZ and Fr. Vidal FUENTE VEGA in Santa Bárbara, in the state of Barinas, where the protest is currently very strong and where in recent days there have been deaths; Fr. Sante RONCHI, Fr. Rafael WLEKLAK, Fr. Giovanny NOVA DELGADO and two young people in formation in San Cristobal, capital of the State of Táchira, located in the Venezuelan Andes in the western part of the country.

Today I spoke via Skype with Father Javier Álvarez, superior of the mission, who has reassured me about the conditions of life of the Oblates, although he did not conceal the gravity of the situation that could later degenerate into violence.

I invite all Oblates and Lay Associates to pray for the Venezuelan nation, for the Church in that country, which is trying to accomplish an act of mediation in favor of peace and reconciliation between the political forces, and for the Oblates who are sharing the difficult conditions of the population. (Frascati, Provincial House, 27 May 2017)