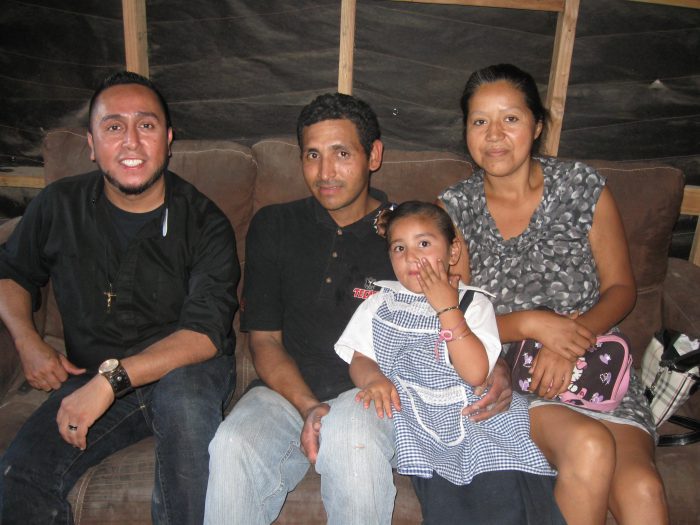 Fr. Jesse Esqueda, OMI (on left) with one of his parish families.

When Fr. Jesse Esqueda, O.M.I. talks about his ministry in Tijuana, Mexico he can recite a lot of numbers about the impact the Missionary Oblates are making in the area.  There are 200,000 people living within the parish boundaries.  In a typical year the Oblates help provide 10,000 visits to the doctor, 3,000 trips to the dentist and distribute food to 60,000 needy families.

But instead of focusing on the big numbers, Fr. Jesse prefers to look at his ministry in smaller quantities – one parishioner at a time.

The people we work with either live in poverty or extreme poverty,” said Fr. Jesse.  “It is all our responsibility to help them survive.”

Here are a few examples of people who have inspirited Fr. Jesse in his Tijuana ministries:

Enrique is 14 years old and lives in a shack with no running water or sanitation.  He takes three buses to reach a community center run by the Oblates at San Eugenio Parish.  At the center he can use a computer to do his homework.

Enrique comes to the center a couple of days a week after school.  His mother encourages him to go there, fearing that her son would get into trouble if he spent too much idle time in their gang-infested neighborhood.

At San Eugenio Parish, Enrique receives more than just help with his homework.  He takes part in youth development programs to help teens deal with issues such as peer pressure.  He also takes part in activities to deepen his faith.  When the center closes, Fr. Jesse tries to give Enrique a ride, so he doesn’t have to take three more buses to get home.

Maria recently came to Fr. Jesse with what she considered good news.  She was hired at a local factory, working 48 hours a week for a total of $60 per week.  Father Jesse did not consider the job “good news.”

“When they tell me that they got a job at the factory then I know it’s over for them.  They will never get out of poverty,” said Fr. Jesse.

By contrast, about 80 percent of the students who are in the youth group at San Eugenio Parish will go to college or another form of higher education.

“It’s huge that we get them an education,” said Fr. Jesse.  “It’s their only realistic way to get out of poverty.”

The Gonzalez family was living in southern Mexico and operated a small family business.  They lived humbly, but didn’t lack for any of the basic necessities.  Then the father of the family was killed in random violence, and the family was thrown into chaos.

The business soon failed.  So the family, including extended family members, decided to escape the violence and move to Tijuana to look for work.  A total of 30 people made the journey, including 14 children.  Currently all 30 of the people are living in just two rooms.  As they try to find work, they sell tamales on the street, earning just a few dollars a day.

Pablo is 20 years old and lives alone.  He is a member of the youth group at San Eugenio Parish.

Pablo began missing youth activities.  When Fr. Jesse went to visit him, he discovered that Pablo had lost his job.  A rainstorm had collapsed his roof, and everything he owned was destroyed.  Pablo hadn’t eaten for three days.

“How can someone that I consider a friend go without food for three days,” said Fr. Jesse.  “I can’t accept that.”