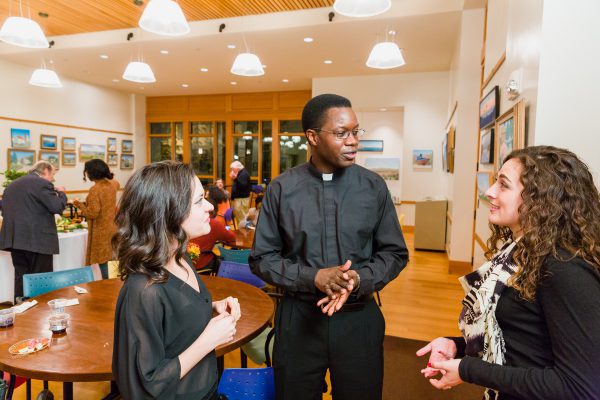 Most people think that getting into Yale University is the start of life on easy street.  But Fr. Karl Davis, O.M.I. knows better.

Father Davis is an assistant chaplain at St. Thomas More (STM) Chapel and Center at Yale.  He said students there don’t necessarily “have it made.”  They face many pressures and difficulties, all while attending one of the most exalted schools in the world.

Going to Yale can become a burden because of the super high expectations,” said Fr. Davis.  “They must put in so much work and be very dedicated if they are going to succeed.”

Father Davis began working at Yale in August 2015.  He describes his work as being a companion to students, helping young people who are seeking guidance in their spiritual discernment, or who want pastoral counseling during difficult or questioning times.

Father Davis said one of the first things he discovered after arriving at Yale was that it wasn’t just a bunch of rich kids trying to get richer.  Instead, most students are simply passionate about learning, and want to be good stewards of their gifts.

“They are not just brainy people.  They have desires to use their gifts and talents in ways to serve others,” said Fr. Davis

At STM, Fr. Davis and the other chaplains help students to: learn, pray and act.

The STM fellowship lectures provide opportunities for students to examine their faith and work by engaging in dialogue with distinguished individuals on issues of culture, science and law.  Students are also invited to take advantage of the rich sacramental life offered each week at St. Thomas More Chapel.  The STM social justice ministry connects students with service and social justice related community experiences through volunteer and service learning opportunities.

“The students have an openness to dialogue, both of the intellect and the heart,” said Fr. Davis.

Father Davis took a rather unusual path to Yale.  He was born in New York City in 1971, the son of immigrants from Trinidad and Tobago.  He earned a Bachelor’s Degree in Economics from Iona University and went to work for a bank.  But it didn’t resonate with his spirit.  Later he became an elementary school teacher.  He loved working with the kids, but still felt something was missing.  Then he met the Oblates.

“My first experience with an Oblate was at a prayer gathering where he spoke of being made whole in God’s love,” said Fr. Davis.  “From then on, I gradually grew in attraction to Oblate life.”

Father Davis said he was attracted to the Oblates because of their simplicity, closeness to the people, balance and humor.  He was also attracted to Oblate founder, St. Eugene De Mazenod, and his burning desire to share the liberating love of God with those who are loved the least by the world at large.

Father Davis was ordained in 2005.  He first served at Christ the King Church in Miami, Florida, a diverse congregation with parishioners coming from more than 15 countries.  Then he became Pastor of Sacred Heart Church in Oakland, California with a primary African American congregation.  Neither place would be confused with the “Ivy League.”

But Fr. Davis said his previous work at inner-city parishes and his current work at Yale do have many similarities.  There is faith, fellowship and a commitment to helping those less fortunate.

“I share with the students the values of the Oblates, and pray that they will carry those values into the future,” said Fr. Davis.