By Peter Tran,  Originally Published by The National Catholic Reporter 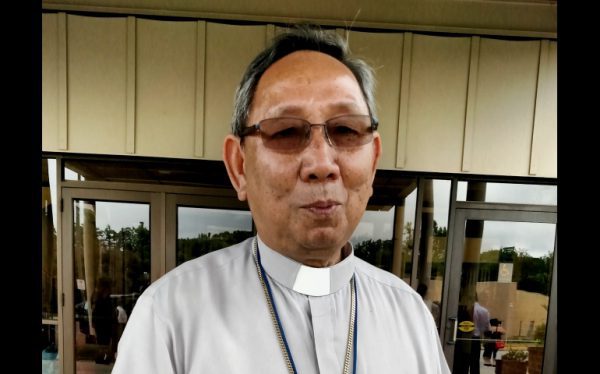 The last official engagement on Ling’s list was the thanksgiving celebration of the 17 martyrs of Laos on June 16-17 at the Shrine of Our Lady of the Snows in Belleville, Illinois. The 17 martyrs, known as “Joseph Thao Tien and his 16 companions,” were beatified Dec. 11, 2016, at the Sacred Heart Cathedral in Vientiane, Laos’ capital.There are about 45,000 Catholics in Laos, less than 1 percent of about 7 million people. Foreign missionaries were expelled and Catholics persecuted after Pathet Laos communists took over the country in 1975. Priests and monks were jailed or sent to re-education camp.Today, Laos has opened to the outside world. However, regardless of economic reforms, the country still remains poor and dependent on foreign aid. The government also exercises strict control over mass media.

The cardinal-elect had a few stops in the United States before flying to Rome for the consistory on June 28. He is then scheduled to go to France, before heading back to Laos in July.

It took him a few days before the reality of the announcement from Rome started to sink in, said Ling, an ethnic Kmhmu. Besides Kmhmu, he can also speak Lao, French and English. This interview, which was conducted in Lao, covers the surprise news, his first reactions and thoughts on why Francis elected him, the relationship between the church and government, and the martyrs of Laos. It has been edited for length and clarity.

NCR: Cardinal-elect Ling, when did you hear about the appointment?

Ling: I really had no idea. All of a sudden, I got a phone call from a former student. He said congratulations on your election to be a cardinal. I told him not to tease your elder [grandfather]. It is not right. I didn’t believe him at that time, which was after dinner on Sunday [May 21]. I was in Pakse at that time.

Afterward, I received another phone call from a religious sister, who also said congratulations to my appointment. I said, “Are you crazy?”

Then I asked who else were elected. She said there were five people and you were the fourth one. I started to believe her just a little.

Click Here to see the rest of the article at NCRONLINE.ORG