By J. Michael Parker, Originally Published on the OST Blog 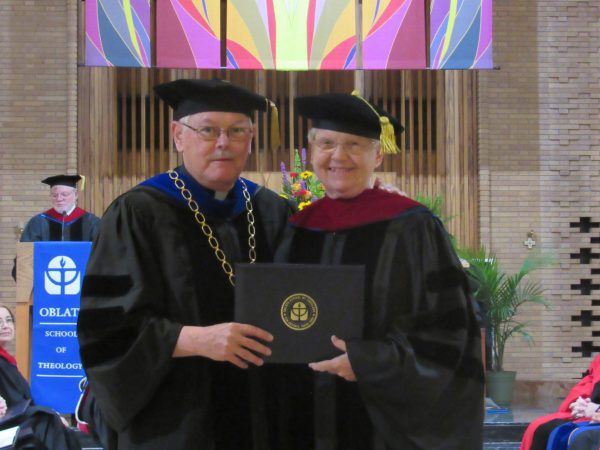 “knowing the Oblates has reinforced for me the charge of St. Eugene to ‘leave nothing undared,’”

The first woman chancellor of the Archdiocese of San Antonio called Oblate School of Theology “a concrete testimony to the Oblate charism lived out,” but “a blessing to all who, like me, find a home here,” as she accepted an honorary Doctorate of Pastoral Ministry from the School May 4.

Sister Jane Ann Slater, CDP, twice served as superior of her Congregation of Divine Providence and served two years as interim president of Our Lady of the Lake University from 2013-2015. She was appointed chancellor in November 2014, and has served in the post since August 2015.

Sr. Slater has served both the University and her congregation in a variety of roles.  She was a member of the university’s chemistry faculty from 1970-1981, was the dean of students in 1974 and chaired the Academic Affairs Committee in 1972. Most recently, she served on the Board of Trustees from 1987-1993 and again from 2005-2011 during her second term as superior general of her congregation. She also taught chemistry at Providence Hugh School for some years.

A native of Texarkana, Ark., Sr. Slater made vows as a woman religious in the Congregation of Divine Providence in the mid-1950s. She earned a Bachelor of Arts in chemistry from Our Lady of the Lake and a PhD in inorganic chemistry from the University of Colorado. She holds the distinction of being the only member of the Congregation of Divine Providence to serve two terms as Superior General of the congregation, from 1987-93 and from 2005-11.

She was a member of its General Council from 1981-1987. Before that, Sr. Slater spent more than 20 years as a teacher in elementary and secondary schools in Louisiana, Oklahoma and Texas. Sr. Slater has served on Archbishop Gustavo García-Siller’s envisioning team, whose goal is to articulate a five-year vision for the archdiocese with priorities and goals.  She also has been director of studies for Assumption Seminary.

Sr. Slater called the honorary degree “icing on the cake” of the many blessings she has received in her decades-long friendship with the Missionary Oblates of Mary Immaculate.

“I love the ministry OST has; I love what you do for the whole church – for the Southwest, the United States and beyond; I love having the opportunity and challenge to get to know St. Eugene de Mazenod and his amazing missionary heart and spirit,” she said. De Mazenod founded the Missionary Oblates of Mary Immaculate.

Sr. Slater said she loves her ongoing friendships with many “wonderful Oblates,” seeing how they live St. Eugene’s missionary spirit and how his charism animates their lives. She also cited the Oblates Associates for their spirit and enthusiasm.

“I’ve been greatly blessed by Oblates. I give thanks to God’s providence for leading me to San Antonio and to my congregation, in which Oblates have been so significant. I’m sure that St. Eugene never imagined all that his men would accomplish in their missionary lives. His challenge to ‘leave nothing undared’ certainly has led men throughout their ministry in South Texas, from the Cavalry of Christ until today,” she commented.

Sr. Slater said the Oblates actually have been part of her life since her childhood, when an older cousin attending Our Lady of the Lake raved often about Fr. Paul Decker, OMI. Later, when Slater enrolled at the university, she met priests there whom she called “my own Oblates.”

During her formation for religious life, she learned that the Oblates already had a long history of collaboration with the Sisters of Divine Providence. They provided chaplains for the sisters, and in 1903, Father Henry Constantineau, OMI, founded the theological and philosophical school that survives today as Oblate School of Theology. He also served as the sisters’ ecclesiastical superior and helped them become recognized as a pontifical congregation in 1912.

She explained that “knowing the Oblates has reinforced for me the charge of St. Eugene to ‘leave nothing undared,’” adding, “We climbed some amazing heights; I dared everything I had, and they did, too.”