By Bong Samiento,   Originally Published by The Herald Malaysia Online

(Editor’s note: The Oblates of Notre Dame were founded November 10, 1956 in Cotabato City, by two missionaries of  the Missionary Oblates of Mary Immaculate who came to Manila in 1939: Father (later Bishop) George Dion and Bishop Gerard Mongeau.) 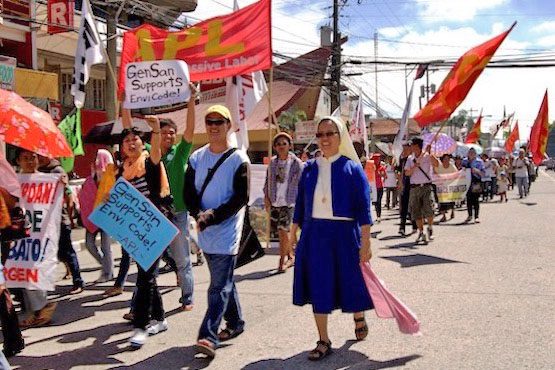 MANILA: Sister Susan Bolanio, a nun of the Oblates of Notre Dame congregation, can usually be found at the center of any protest action that concerns the environment and tribal people in southern Philippines.The nun describes her work with the poor as “dangerous.” There have often been times when she has felt fear. But her religion gives her the strength to continue her journey with the people.

Sister Susan’s desire to dedicate her life to the Lord was awakened back in her high school years in the sleepy little town of Pigcawayan, North Cotabato province in the south of the Philippines. The nuns who walked the trails to poor mountain villages first piqued young Susan’s interest. She decided to find out more and to follow them.

In 1971, she took her religious vows, The Oblates of Notre Dame, a religious congregation in Mindanao, with 172 sisters registered nuns in 2016, has been Sister Susan’s family for 46 years now.

Founded by two missionaries of the Oblates of Mary Immaculate in Cotabato City on Nov. 10, 1956, the congregation’s primary apostolate is pastoral catechesis. While the sisters are known to work in parishes and schools, there are those like Sister Susan who are actively engaged in social ministry, including the promotion of the rights of indigenous peoples.

Sister Susan has climbed the mountains and walked the lowlands of Mindanao in her many fights, especially against big mining corporations. Her greatest “crusade” with the tribal people was against the operation of a mining project in the province of South Cotabato.

She has worked at the forefront of protests against the displacement of tribal communities and the destruction of the environment. She also stood with the tribes against coal mining in the picturesque town of Lake Sebu, also in South Cotabato. For the tribal people, Sister Susan is a “brave defender of their rights.

Bishop Dinualdo Gutierrez of Marbel describes the nun as a “feisty religious who has amassed a significant track record fighting progressive causes dating back from martial law era.”

Sister Susan said she was “conscienticized” during the dictatorship years in the 1970s. “I ran for my life as the government went after activists during that difficult period,” she told ucanews.com. She said her congregation’s mission to be in “solidarity with the poor” sharpened her commitment.

“The church needs to intervene in the struggles of the poor,” said Sister Susan, adding that “God hears the cries of poor people.”

The tribal people of Mindanao, many of whom are poor and have no access to education, have a soft spot in the nun’s heart. “These indigenous people are mostly illiterate, and I am only helping them assert their rights in their ancestral domains,” she said.

Her work with tribal communities earned her the tags “leftist” and “communist” from the military that has battled a communist insurgency in Mindanao for the past 50 years. Sister Susan had to explain to soldiers that she is a “religious person working for the welfare of the poor.” She said she could be killed or sued for fighting big companies and influential people

“I have fears, but I don’t allow it to paralyze me because of my love for the poor,” she said. “I think I have not been sued because my advocacies are based on legal and moral frameworks,” she said.

In 2010, she was one of the leading forces behind a campaign to ban open-pit mining in the province of South Cotabato, an area known for huge mineral deposits. The open-pit ban was approved by the government and continues to be in effect. In recent years, Sister Susan’s engagement with the poor has included work with small business fishermen and their families.

She also established a center, Stella Maris Seafarers’ Center,” in General Santos City, the country’s “tuna capital.” The center assists tuna fishermen who have been arrested for illegal fishing in neighboring countries such as Indonesia.

“So many poor Filipino tuna fishermen are still languishing in various jails there,” said the nun. “Marginalized people deserve love and compassion,” and she has vowed to journey and fight with them and their cause “until I am capable.”–