By Robby Korth,  Originally Published by the Roanoke Times 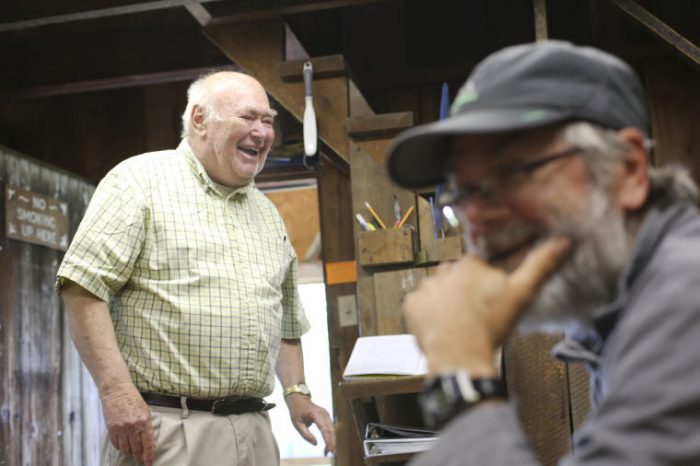 PEARISBURG — Pat Muldoon leans against the worn table inside the 40-year-old hiker hostel located next to the Holy Family Catholic Church.

Muldoon, a church member, was there in 1974 when a former corn crib from a Giles County farm was hauled up the hill and plopped near the church in Pearisburg. And he’s seen all the changes since.

Hikers helped cut boards and put together various parts of the building. A former church member built on a porch. Muldoon has kept the plumbing working through freezes.

But one thing has remained the same at the hostel that’s now a fixture along the Appalachian Trail in Giles County.

“The parishioners just love this place and doing this service,” 78-year-old Muldoon said.

For the small church that once had as many as 200 members — now down to about 50 — the hostel is a source of pride in a town that sees its share of backpack-clad hikers making a pitstop as they journey between Georgia and Maine.

The hostel is a 3-mile trek through downtown and neighborhood streets from the Appalachian Trail. But despite that trip — which adds miles without putting folks further along the trail — it’s a good location for hikers to stop for the night, said Terry “Soda” Dowdy, a 48-year-old hiker from St. Augustine, Florida, who stayed at the hostel earlier this month.

The hostel offered a chance for a shower — a rare activity for long-distance hikers — and a stove for a hot breakfast in the morning before Dowdy sought his next adventure on the trail.

“This morning [Wednesday] I was able to make coffee and potatoes for breakfast,” Dowdy said, adding that “beats eating breakfast bars or Pop Tarts.”

Anne Wheeler, owner of the Pearis Mercantile and hiker shop in downtown Pearisburg, has already noticed many Appalachian Trail hikers coming into town. She estimates the town has already seen about 100 or 150 so far this year with many more expected.

Wheeler opened her shop last year after retiring from a career as a science teacher and track coach at Giles High School and is anticipating a rise in business this summer from the folks with backpacks. Their arrival is a welcome sign to many in Pearisburg who look forward to a little business from hikers who are dying to stop at a Chinese or Pizza Hut buffet or grab a BLT from a local diner.

“They’re very much a part of our community,” Wheeler said.

The welcoming atmosphere is a nice touch for hikers, Dowdy said. Pearisburg has been one of the friendliest towns he’s visited since departing from Georgia on March 15 on a journey he hopes will end in Maine.