According to Wikipedia, “Today, with the exception of Nigeria, the largest population of people of African descent is in Brazil.” Of course, the Brazilians of African ancestry are mostly descendants of the millions of men and women who were violently seized from their homelands and brought to Brazil and other countries in the Americas as slaves.

On July 12 of this year, Fr. Isa Vincent INALEGWU, an Oblate born in Nigeria and a member of the Province of Cameroon, has joined the Province of Brazil to add a 21st century African flavor to the multi-cultural Church and Oblate community of Brazil.

The fifth of the nine children of his parents, the 31 year-old Oblate began his formation in Cameroon in 2006. He professed his first vows in 2008 and did his philosophy and theology studies at the scholasticate in Cameroon. He returned to his native Nigeria for his priestly ordination in 2016. 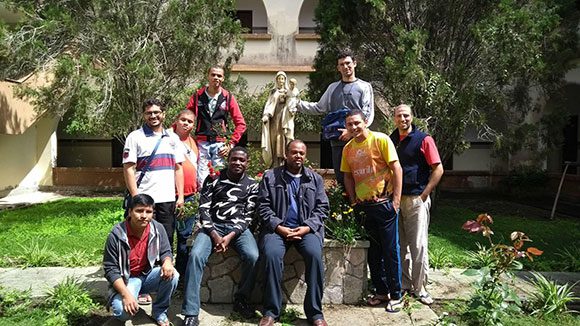 Upon arriving in Brazil, he was asked about his expectations and pastoral plans. He responded: “Initially I have no pastoral project. I am ready and open to meet the most urgent needs of the Province, and willing to do well whatever the provincial and his council ask me to do. In Cameroon I worked in parish ministry and with youth… I really want to learn and integrate into this beautiful pastoral ministry of the Church in Brazil.”