By Liz Quirin, Originally Published by the Belleville Messenger 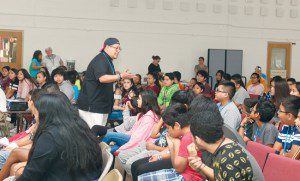 “What makes you feel strong, happy, sad or scared?” Father Juan Gaspar, OMI asked young Hispanics on June 17 at the Diocesan Pastoral Center in Belleville.  About 110 youth and 34 adult volunteers from around the diocese met for reflection, prayer and fun at the annual Hispanic Youth Day.

Young people listened to Father Gaspar talk about “loving your self(ie),” the theme of this year’s gathering.
The oldest of seven boys from Texas, the Oblate shared some of his struggles growing up, including being bullied as “the fat kid,” he said. “I felt like a loser because I was not part of the group.” Now, he said, he feels “powerful, loved and part of the group.” Father Gaspar reminded the young people they need “to remember who you are where you come from and who you belong to.”

“Father Gaspar’s presentations were excellent,” adult volunteer Efrend Garcia said. “He has a way of reaching out to this age group that makes things relevant to them.”

When he decided to become a priest, Father Gaspar said it was somewhat frightening to make such dramatic changes in his life. He had become comfortable and liked being a teacher, but he said he had to put aside his fear when he felt God was calling him to the priesthood.

The young people could relate to someone who made drastic life changes, leaving home and moving to an entirely different place.

“By putting himself in their shoes and sharing some of his personal experiences, he made his presentations come to life for them; his examples were right on target,” Garcia said.