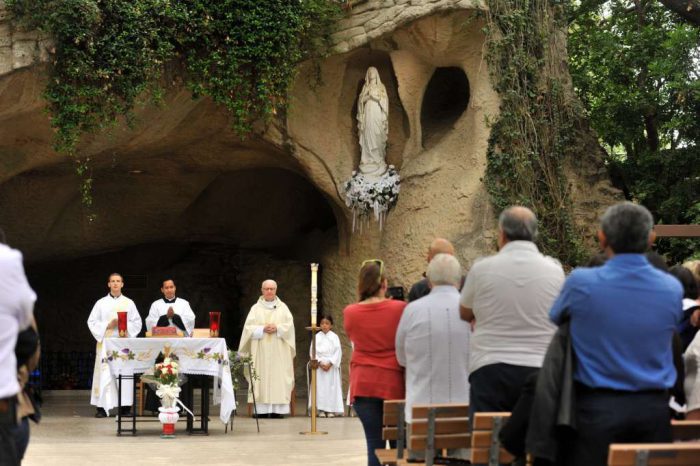 San Antonio is known worldwide for iconic religious landmarks — its Missions were designated a UNESCO World Heritage site in 2015 — but far fewer realize that it’s home to a replica of a religious site that is also well-known: the Lourdes Grotto of France.

The rock formation in Lourdes, a town 523 miles south of Paris, and just 70 miles north of the border with Spain, is known for the sightings of the Virgin Mary, known as the Lady of Lourdes, and its miraculous healing waters. It’s a sacred place for many, drawing several million visitors annually.

The reinforced concrete grotto — and a statue of the Lady of Lourdes — is now known as one of the most exact replicas of the Lourdes Grotto in the Americas. But it didn’t make the news when it was dedicated — Dec. 7, 1941, the same day Japanese military forces attacked Pearl Harbor.

According to Perez, those present at the dedication Mass didn’t know about the attack when it started. But even though this was decades before the digital age, by the end of Mass people already were talking about the nation now being at war, he said.

The same year that the Lady of Guadalupe statue was added, the Grotto Chapel added a Mass celebrated in Spanish, making it one of the first churches on the North Side to offer a Spanish Mass. Our Lady of Lourdes Grotto and Tepeyac de San Antonio are on the campus of the Oblate School of Theology, 285 Oblate Drive. It also offers a daily Mass in English.