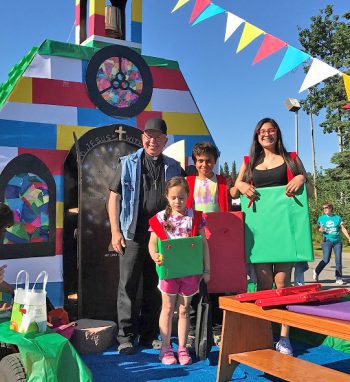 On Saturday, July 22, the Oblate Parish of Our Lady of Perpetual Help on Alaska’s Kenai Peninsula entered a float for this year’s annual Soldotna Progress Days parade. It was a “church” building built out of red, white, yellow, green and blue Lego type blocks block type made of recycled cardboard boxes, construction paper and lots of tape and glue! The theme:  BUILDING ON JESUS CHRIST.

The float was initiated, created and assembled by a crew of parishioners: adults, teens and young folk … Fr. Ron Meyer, OMI joined them with his artistic talents and energy. This was particularly rewarding as we do live in a community of artists! The float featured church doors and “stained glass” windows decorated with traditional symbols of Catholic Christian faith. The door opened to reveal a large host and chalice surrounded by star/fireworks. Over the door were the words: “To Jesus with Mary.” The bell tower held an gold-spray painted inverted flower pot bell and was topped by a large golden cardboard tube cross, held in place by a strand of colorful flags. On the float were similarly colored boxes proclaiming: FAITH, HOPE, and LOVE. A number of those who walked the parade route wore smaller colored boxes as they passed out candy and brochures. 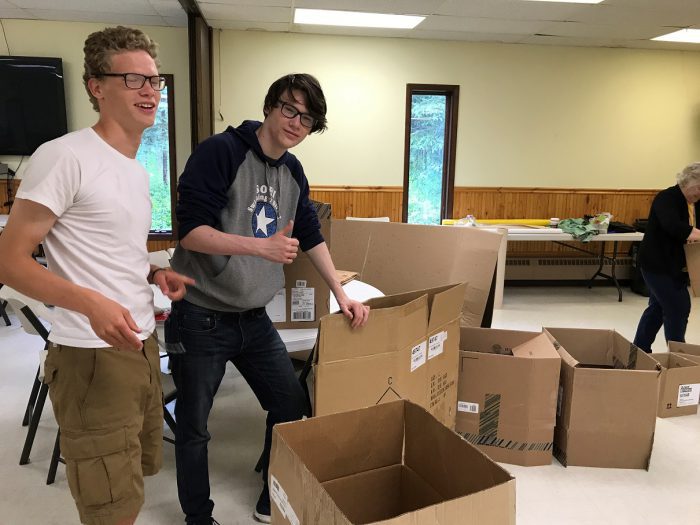 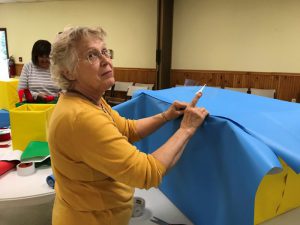 Some members of OLPH who watched the parade afterwards expressed a sense of pride when seeing their Roman Catholic church entry. (There were numerous other church groups who also entered floats with religious themes!) Father Ron walked about half the parade route then scooted away to drive 80 miles south for four weekend Masses in Homer and Ninilchik. He reports having gone to bed Sunday night totally exhausted yet exhilarated: filled to full and overflowing with gratitude for all that God gives us through one another.

Ministry in Alaska is challenging … but extremely rewarding. God is good … and in Alaska, God’s goodness is creatively and naturally magnificent! All that proclaims faith in Jesus as Lord and Savior is both miraculous and inspirational … as mighty as the mountains, as certain as the snows, as refreshing as the clear air and endless seas, as bountifully abundant as the annual harvests … and as sturdy as believers building God’s Church on Jesus Christ. 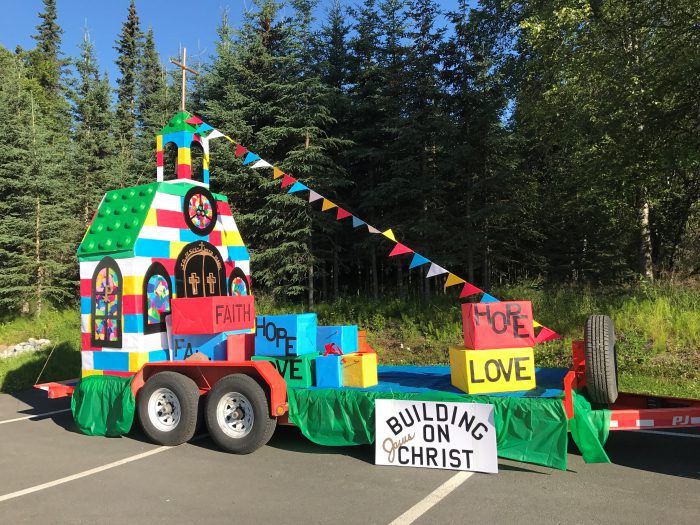