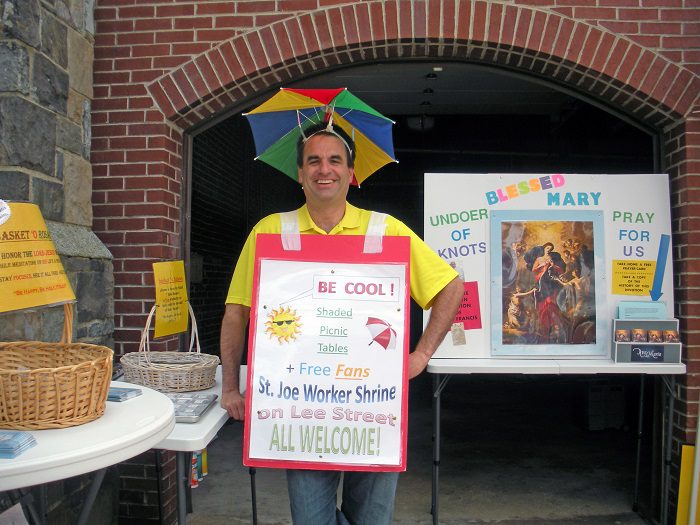 Volunteer, Jim Savarese is a walking billboard inviting visitors to St. Joseph’s during the festival

The Lowell Folk Festival is the 2nd largest free-admission festival in the USA.  This year marked the 31st anniversary of this last-weekend-of-July happening.  The city is closed to vehicular traffic and all center city streets become pedestrian walkways – festival events rotate at scattered venues throughout the city and merchants provide all sorts of amenities, not the least of which are ethnic food booths dispensing the cuisines of the varied ethnic communities that populate Lowell.

The reports that followed the festival indicate that some 150,000 visitors participated in the Festival this year (normally, the figure hovers at 100,000).  The weather this year was picture perfect for the 3 days of the festival – temps in the low to mid 80’s; low humidity and no precipitation or even threat of precipitation. 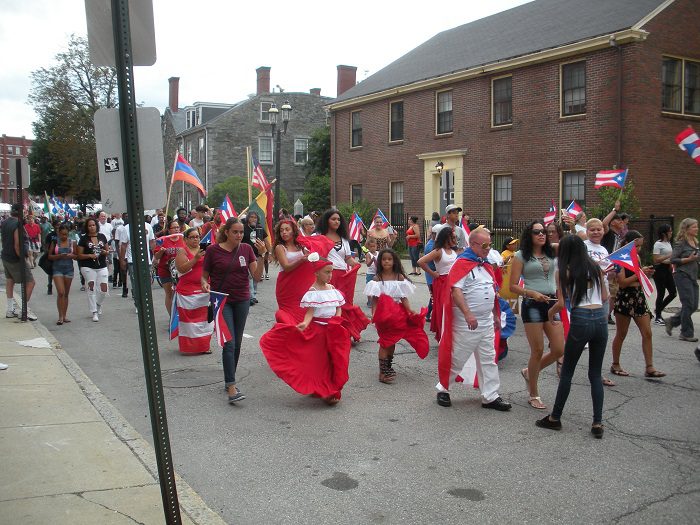 The festival begins with a colorful parade.

We here at St. Joseph the Worker Shrine participated in the Festival in a rather low-keyed way (as we always do) – we simply provided picnic tables outfitted with shade umbrellas arrayed along the area fronting the Shrine on Lee Street: an off-the-beaten-path gathering place where folks can cool down, relax and comfortably consume the delicacies they purchased at the many nearby food booths.  Such oases are few and far between during the Festival.

We also opened the air-conditioned Shrine itself for those who might want a respite – an opportunity to view its beauty or say a prayer or light a candle; soothing chant music enriched this uplifting experience – a steady stream of folks ventured in for a look-see – volunteers offered guided tours or simply provided them with literature explaining the Shrine’s rich array of religious art .  Some 26 volunteers to help with the Shrine’s overall Festival outreach were recruited from the pool of people who regularly worship at the Shrine – an impressive number given that we are not a parish but an intentional worshiping community. 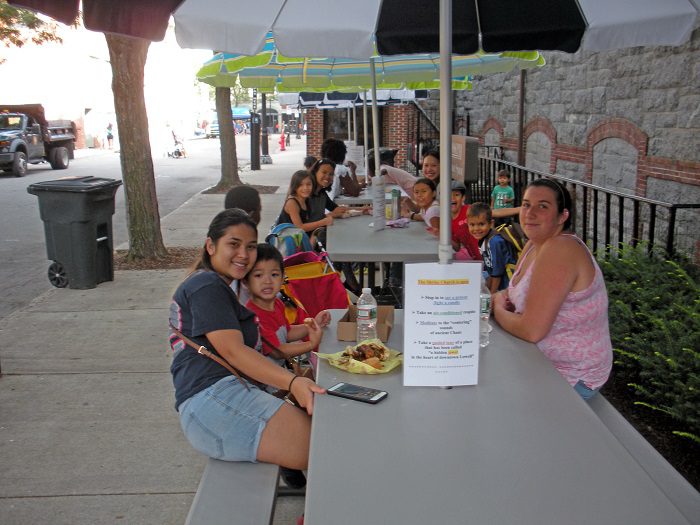 Some of the folks who enjoyed the shade and seats provided by the Shrine.

In addition, we handed-out some “freebies”: hand fans (most welcomed by folks under the late July afternoon sun); these fans promote the Shrine by displaying our logos and ministry schedule and our Gift Shop/Bookstore hours – we distributed our full complement of 500 of these during the Festival.  Other religious tokens (miniature bottles of Holy Water (embossed with an image of St. Joseph and the Child Jesus) for home blessing; hand-made rosaries; shell necklaces from our former Tahiti missions; Marian devotionals highlighting the Blessed Mother as the “Un-doer of Knots”; Oblate literature and such – all gratis as mementos of their visit. 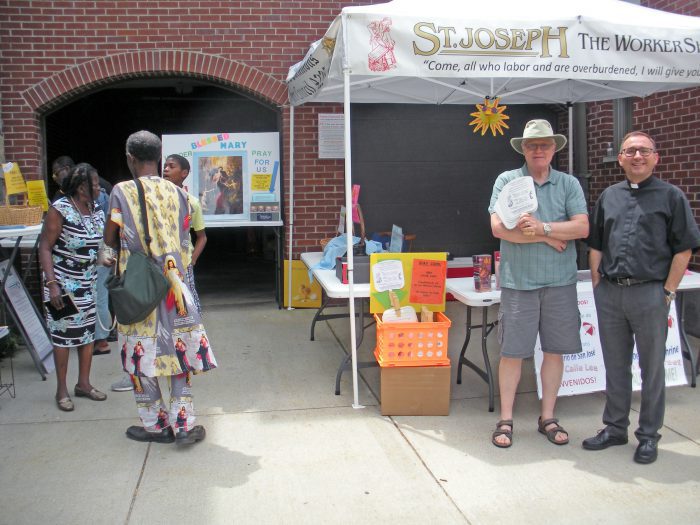 On the right side of this photo, Ray Fournier (on left) holds fans for handing out to visitors, Oblate Fr. Piotr Dudek is on the right.