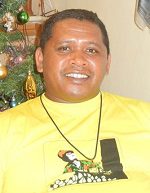 Fr. Alfred RAVELOMAMPISANDRAIBE was born on the huge island of Madagascar and he now serves the Church at Sept-Îles, the city made up of the greatest number of islands on the North Shore of Quebec.

On May 13, 2007, I was ordained a priest in Madagascar, the fourth largest island in the world. This year, I celebrated my tenth anniversary of ordination in Sept-Îles, the city with the largest number of islands on the North Shore of Quebec. On May 13, 2007, I was surrounded by fellow Oblates from the Oblate Province of Madagascar and my biological family. This year, on the other hand, in the Oblate province of Quebec, I was among confreres from several Oblate Units and Innu friends. 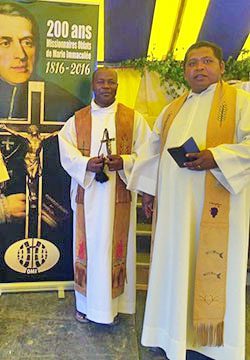 This celebration brought to mind my ten years of priestly service as a Missionary Oblate of Mary Immaculate.

Born into a practicing Catholic family and baptized in a Capuchin parish, I was raised in the Catholic faith, but with no knowledge of the existence of the Congregation of the Missionary Oblates of Mary Immaculate. It was through the visit of an Oblate during a vocation campaign that I discovered the religious family which has helped me so much to grow spiritually and on the psychosocial level.

After making my first vows on September 8, 1999, I continued my philosophy and theology studies in Madagascar. After my ordination, I worked for eight years in my country.

I have been in the Province of Notre-Dame-du-Cap, Quebec, since February 26, 2016. Upon my arrival in Canada, my confreres welcomed me warmly. I began my missionary experience here by visiting the Oblate communities. After that, I left for the Oblate mission on the North Shore.

Now I am preparing to take on the pastoral responsibility of the parish of Notre Dame-du-Cap, Maliotenam, in the near future. In addition to pastoral and sacramental activities, I also visit the Kapatakan Center. It is a rehabilitation center for young people leaving prison. Besides ensuring pastoral presence in this place, I also take advantage of it to continue my integration and immersion in the milieu, learning of the language and discovery of the Innu culture.