Six young men were formally welcomed by the U.S. Missionary Oblates of Mary Immaculate in a Rite of Reception held at the Immaculate Heart of Mary Novitiate in Godfrey, Illinois on August 17, 2017. The men came from five countries on four continents to spend a year in prayer, study and contemplation of  religious life. 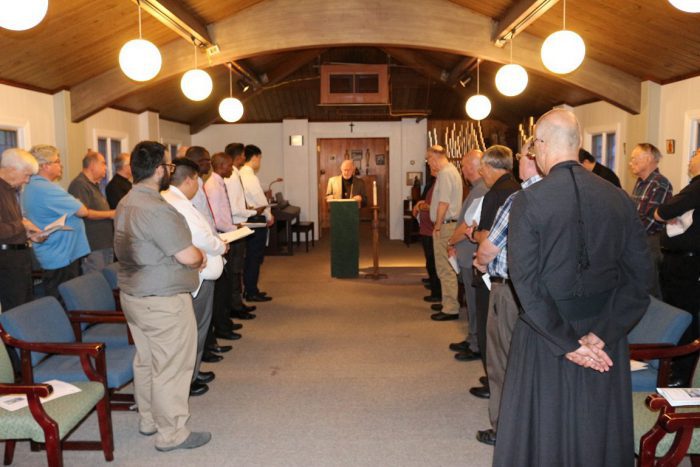 Novice master, Bro. Pat McGee, OMI leads the novices (front left) in the “Statement of Intention” to study and discern a missionary life before a group of local Oblates. 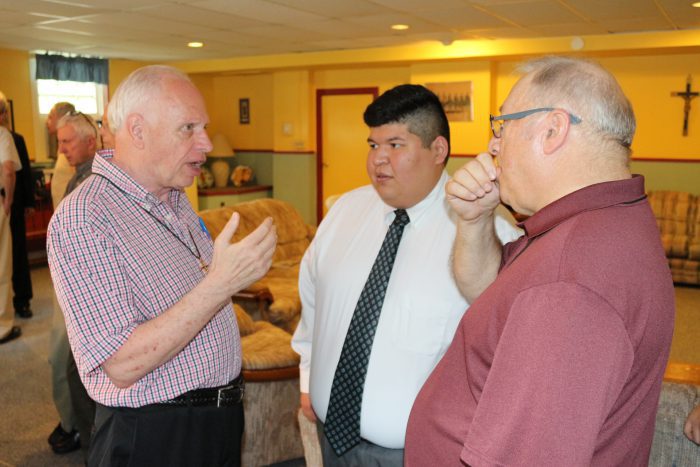 In turn, each of the new men, Joey Methé of Canada, Lázaro Ángel Leal of the U.S., Michael Kabazo and Wilbroad Kapembwa of Zambia, Sarath Kumar Thangaprakasam of India, and Stephen Cheon of Australia signed the formal request for admission to the novitiate and received the medal signifying their status as a Novice Oblate of Mary Immaculate. 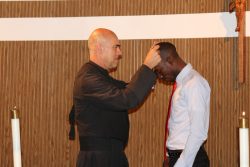 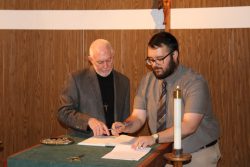 Below, in their own words, the new novices tell you a little about themselves:

My name is Michael Kabazo and I am 25 years old from Zambia.  I am the second last born of 11 in the family.  I attended grade school at Moombo primary school, northeast of the royal village of Limulunga in thewestern province of Zambia (Barotseland).  I completed secondary school at Limulunga High in the year 2010.  After high school, I went to a trade school to study auto mechanics and worked for 7 months.

My vocation story started way back as early as grade 5. I grew up in an Oblate  parish and during that time I was inspired by the way they reached out to the poor with their many faces.  In 2013 I applied to the Oblates and they accepted me into the Pre-Novitiate.  I enrolled at St. Bonaventure University in Philosophy and graduated with a Bachelor of Arts degree.  I also had time to do some pastoral work at the University teaching hospital in Lusaka, and mission experience at St. Leopold in the Shangombo District of the Western province in Zambia.  After 4 years of Pre-Novitiate, I was asked to do my Novitiate here at Immaculate Heart of Mary Novitiate in Godfrey (USA). By the grace of God, on the 17th of August, I was received into the Novitiate in the presence of more than 30 Oblates who were in attendance.

My name is Wilbroad Kapembwa, I am 23 years old, born and raised in Zambia. I did my primary education in Zambia’s  Copperbelt, in Kitwe to be specific.  I did my secondary education at a Minor Seminary in Kasama situated in the Northern part of Zambia.  The atmosphere of the minor seminary became the “fertile soil” in which my vision of becoming a priest grew.  After completing school, I joined my mother in Lusaka and started attending Mary Immaculate Parish.  It was there that I first came in contact with the Oblates of Mary Immaculate.

Inspired by their unflinching zeal to preach Jesus Christ to the poor with their many faces, I entered the Pre-Novitiate formation community in August 2013.  While at the Pre-Novitiate, I was graced to study philosophy, do pastoral works at Mary Immaculate Parish (2 months), St. Joseph Mukasa Parish (1 year), and the University Teaching Hospital (3 months).  My Oblate Mission Experience was in Kalabo, Western Zambia, at St. Michael’s Parish.  Once again, I am graced with the privilege to do my novitiate here at Immaculate Heart of Mary Novitiate.  I look forward to my time in the novitiate.

My name is Lázaro Ángel Leal, I am 25 years old, born in Harlingen and raised in Brownsville, Texas. I am the youngest of two children.  I grew up with my paternal grandmother living in my childhood home, and as a family we attended the diocesan parish, Christ the King, in Brownsville.  When I was in high school I wanted to grow deeper in my Catholic identity, so I decided to attend a Catholic College, and that is where my vocation journey took a big leap; I was a student at Our Lady of the Lake University in San Antonio.  I made my first serious OMI discernment connection with then-scholastic, Fr. Dan Ziegler in the Fall of 2012, and then made contact with Fr. Charlie Banks, the Vocation Director.

In May of 2015, I finished my Bachelor’s Degree and proceeded into the workforce.  In May of 2016, I heard about Fr. Dan Ziegler’s Ordination & First Mass.  I was able to attend the First Mass, but went, hoping to avoid any and all Vocation Directors that day!  I was not ready!  Later, I met up with Fr. Richard Hall, OMI, current Vocation Director, and we talked.  Fast forward to August of 2016, I entered the Pre-Novitiate Program in Buffalo, NY, where I spent a year that has led me to discern a call to Oblate life as a Brother.  So, here I am, and I ask for your prayers!

My name is Joey Methé, I am 30 years old from the Notre-Dame-du-Cap province.  I am originally from Sudbury, Ontario but have lived in Ottawa, the capital of Canada, for the last 8 years.  I come to the novitiate after working as a leader of the Ontario student movement and as a freelance graphic designer for the last 10 years.  My interests include history, politics and communications.  I also enjoy going for long walks as well as going for hikes in the woods to contemplate the beauty of nature.  Becoming an Oblate is my way to respond to God’s call to solidarity with the poor and the most vulnerable in our world.  What really convinced me to join the Missionary Oblates of Mary Immaculate is their closeness to people, their hospitality and their openness to discern the signs of the times, as decreed by the Second Vatican Council.  That’s why I have been collaborating with the Oblates for the last 4 years at Sacred-Heart Parish in Ottawa and working with the pastoral team at the Sanctuaire Notre-Dame-du-Cap.  During my novitiate, I’d like to deepen my understanding of the Oblate tradition, community life and charism, all the while deepening my relationship with Jesus.  I ask for the prayers of all my Oblate brothers during this time as I “marinate” in the Oblate juices!

My name is Sarath Kumar Thangaprakasam, I am 23 years old.  I hail from the Mazhuvankarunai parish in the Vellore diocese from the state of Tamil Nadu in India.  I come from a good, pious Catholic family.  I have 4 elder brothers and an elder sister; I am the youngest in the family.  I have lost both of my parents.  I have had a desire to become an Oblate since my schooling, where I learned about the Oblate’s dedication to the poor and special devotion to Mother Mary.

I joined the seminary for the Oblate formation program in 2012.  During the year, I enjoyed playing the keyboard (harmonium) and Indian classical instruments.  I completed my B.A. in Philosophy at De Mazenod Institute of Philosophy, which is affiliated with Indira Gandhi National Open University at Perambakkam in Chennai. That’s where I learned to love the Oblates who helped form my spiritual and community life. In 2016 I continued the discernment of my vocation during my regency and pre-novitiate by serving various ministries.  By God’s grace, now I am here in Godfrey, being called by God to discern my call on American soil and I proudly serve the Lord.