Fr. William MORELL from the United States Province, currently serves in fund-raising to support Oblate missions worldwide. He recently visited the Province of Australia. One of the principal ministries of the Oblates there is the education of youth. The visitor from the USA was greatly impressed by what he saw during his visit. 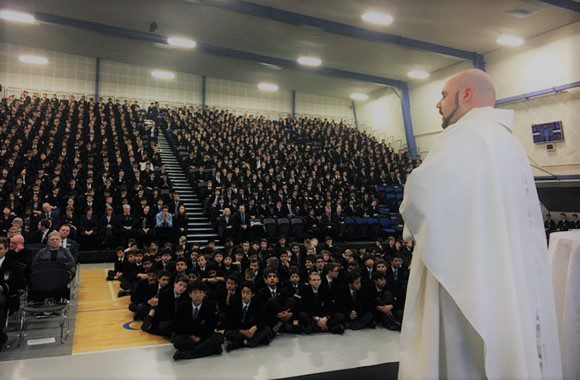 Silence. It’s not a word you would associate with 1,400 high school boys packed into a gym… but then, maybe there’s something special in Australian water! If it had happened in only one Oblate college (high school) in Australia, I might have assumed it was something external like the water. But at two colleges a thousand miles apart… at two Masses a week apart! No, silence was not an accident of place or situation. Nor was reverence, or respect. None of these come to 1,400 boys by accident.

Former high school teachers don’t impress easily. For me, it has been 30 years since I taught at the Oblate High School Seminary in Texas. But, I cannot say my memories of those years are dominated by occasions where silence or respect dominated. Triumphant shouts from the ball field or borderline chaos in a classroom or two, an occasional act of exceptional bravery or prowess… for me those memories prevail, not what I saw at these 2 Australian Oblate schools.

In fact, one can learn quite a lot if the scene and message are consistent and insistent. The Oblates and their very openly Oblate-inspired ministry with youth at these schools witness clearly to values and priorities St. Eugene championed early in his priesthood with his Association of Christian Youth. Fr Christian FINI, former director of MAMI in Australia, didn’t have to point this out as he showed me the campus where he is Rector/Principal and where I concelebrated the huge school Mass in honor of St. Eugene’s feast day and the 50th anniversary of “Mazenod College.”

But let me speak more particularly about the school where I spent three full days on first landing in Australia. There is absolutely no question of its Oblate association and identity. Look in any direction and you will see an Oblate reference… on a building, in the name of school organizations, and even with the name of a classroom. 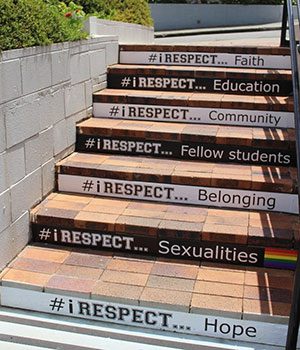 I often walked through the complex campus of Iona College with its Rector/Principle, Fr Michael TWIGG. It is sprawling and gorgeous, the first Oblate secondary school founded by the Oblates of Australia. But its beauty and size are not what prompted my admiration. No, it was the attitude of the students, 1500 of them… collectively gathered, (just like at Mazenod College) in respectful silence to begin their “Founder’s Day Mass” and in the countless individual boys I spoke to or were greeted by. That’s what impressed me. I knew their attitudes and their spirit did not come by accident.

I taught high school for 10 years and I have been around high-school age nieces and nephews for decades. Aware that “all comparisons are odious,” I won’t compare. But I will say the respect, genuine and readily-expressed friendliness, and appropriately-timed silence (without a spoken directive!), frequent reference to the poor, attentiveness to others, all these are very impressive. Not wanting to leave such values to chance expression, they are very consciously and carefully cultivated by the Oblates, the staff, and the very campus itself.

As I said, I don’t think I impress easily. But the spirit and the respect, even the silence I found at these schools have left me wide-eyed, open-mouthed… and proud of how the Oblates are making St. Eugene’s commitment to youth so effective in the nearly 3,000 students I walked among, spoke to… and heard from, in words and with silence.