Father Roy Snipes, O.M.I. of Our Lady of Guadalupe Catholic Church in Mission, Texas is well-known for his passion for all of God’s creatures, so it isn’t surprising that he’s made the news recently for taking in a dog who desperately needed his help.

Father Snipes couldn’t turn his back on G2, a German Shepard who had been abused by her previous owner.  The 59-year-old owner was arrested and charged with animal cruelty when a video of him dragging the dog behind his motorized scooter went viral on social media.  According to witnesses, he dragged G2 for about two blocks.  The viral video sparked outrage in the area and local police received hundreds of calls from concerned citizens about the incident. 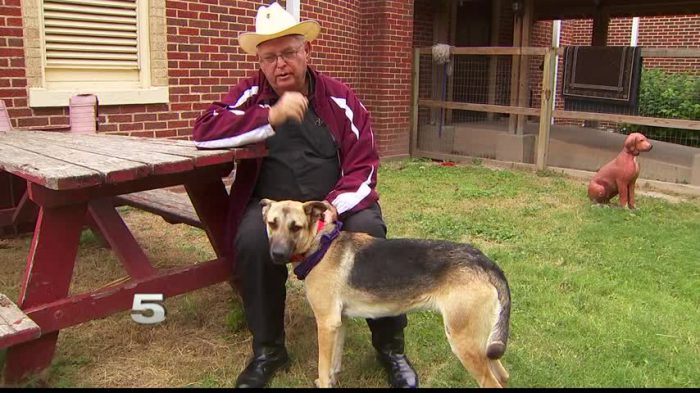 The previous owner was a parishioner of Fr. Snipes’ parish.  But Fr. Snipes isn’t one to criticize.  Instead, he takes action.  “There’s more goodness in him than he even realizes,” Fr. Snipes said of G2’s abuser.  “But he’s a roughneck.  I don’t think he really wanted to hurt his dog.”

Ceniza isn’t the only animal to benefit from Fr. Roy’s kind and compassionate heart.  She joins nine other dogs who have made their way to Our Lady of Guadalupe.

As the Pastor of Our Lady of Guadalupe Parish for over 20 years, Fr. Roy has become well-known for taking his four-legged friends with him wherever he goes.  “My dogs go with me everywhere,” he explained.  “They go with me to church, funerals…they help break the ice.  They are great communicators.” 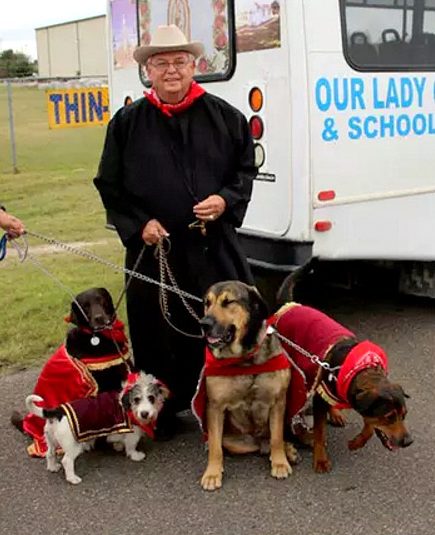 His compassion for animals is tied in with his Oblate roots.  “In 1816 when the congregation was founded, St. Eugene De Mazenod spoke of how the Church was rigid, frigid, formal,” said Fr. Roy.  “He wanted to find a way to engage the people – and an old dog can really help with that.  Dogs help us to be a little warmer, friendlier, more free and hospitable.  It’s been a large part of my ministry.”

Father Roy’s first dog, Gunzel, went through the seminary with him.  One year after Gunzel died, Fr. Roy welcomed Magna into his heart and home.  “She became a big part of the story of my life,” he said.  “When I came to Our Lady of Guadalupe, people were worried about if they’d like her or not.  They loved her.”

While he welcomes his dogs to join him in the church for Masses, not all of them attend Mass each week.  “They’re Catholics – but not necessarily fanatics,” joked Fr. Roy.  He allows the dogs to come and go as they please, but three of his furry friends are “faithful Catholics” and attend Mass regularly.

He anticipates that Ceniza will fit in nicely with the rest of the “Catholic” dogs at the parish.  “She is quite a celebrity!  She’s doing great,” said Fr. Snipes of his newest dog.  “At the age of just over a year, she’s still pretty much a nut ball, but she loves us and we love her.  She’s not quite ready for civilized society, but she gets a lot of company.  I hope as she comes ‘down to earth’ little by little, we can go to Mass together.”

Father Snipes is excited to introduce Ceniza to his parishioners.  “People are really anxious to see her.  Probably the Sunday she makes her ‘debut’ we’ll get a bigger than usual collection!”

Not all of Fr. Roy’s animal companions are dogs.  He also has two donkeys and a llama – but he tells the children that the llama is the camel in the story of the Three Kings.  “We dress him with a hump and he comes into the church with the kings during the feast of the Three Kings,” he explained.  The donkeys play the role of the Holy Family’s donkey at Christmas and in their four-mile Palm Sunday procession.