Editor’s Note: The letter below was sent to Fr. Warren Brown, OMI, General Councilor for Canada-US by Sally Gomez-Jung, Oblate Associate and former Professor of Pastoral Education at Oblate School of Theology in San Antonio, Texas. Her account of what she has experienced in Puerto Rico offers a first-hand, “insider’s look” at a story which has dominated the headlines for weeks.

Fr. Brown received Ms. Gomez-Jung’s permission to publish her reflections because, in his words, “Sally’s letter is touching and reads like a real missionary’s journal. … I know that Sally would like the story to get out and that help (and prayers) keeps coming for the people of Puerto Rico.” 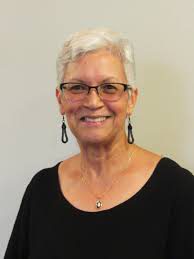 Blessed be the God of mercy and compassion and who hears the cry of the poor!

Thank you all for your prayers. They have sustained me and reminded me that I am not alone in this mission. While I may have been doing simple things, I pray that they remind those I encounter that God is present and loving them through what I do and who I am in your name.   I am here in your name through your support and prayers.

Mom is doing well but a little disoriented by all that is happening. The nursing home has water but electricity comes and goes and they are depending more and more on the generator which is designed for emergencies. This has been a long one and not over yet!!!!

At the nursing home I have spent time folding clothes, peeling potatoes for a whole day, have become a hairstylist (cutting hair and washing and blow drying) setting tables, helping in the kitchen, feeding bedridden residents, working in the dispensary sorting medications and assisting mom. I get up at 5 am to pray and get ready to go help mom bath and get ready for mass. I go visit a few times a day and return at 4 pm to feed her and get her ready for bed. I thank God for this time with her. It is priceless!

I would like to share with you some of the experiences I’ve had in the past week and what I have learned.

Last Thursday, I met with an Oblate priest and gave him a donation on your behalf. He had a great visit and he was grateful for the gift. I hope to visit his parish before I leave.

Later that morning, I went with two Capuchin Friars to Utuado, a small town in the middle of the island. It is surrounded by mountains. You have probably seen it on TV a number of times. Twenty-four families were disconnected from the town as the rain washed away the bridge. You probably saw people using a cable to cross the river to get to the other side to get food and water and one man took his father to the doctor. I was in disbelief to actually see the devastation with my own eyes. Tomorrow it will be three weeks since Maria. They are still without water or electricity.  We visited the church in the plaza staffed by Capuchins. I was able to offer them a donation on your behalf and visit with members of the Parish. The people gathered in church for mass in solidarity and seeking ways to find hope in their collective situation. They had two lanterns for light and hoped that by the time mass ended there was still daylight to get home. They looked exhausted and worn out… Standing in lines was the new daily normal. One of the ladies told me that she went to bed at night hoping that it was a nightmare from which she would wake up in the morning. But reality hits when she wakes up and it’s the same routine again. Lines, no water, no electricity and little hope that it will be better soon. 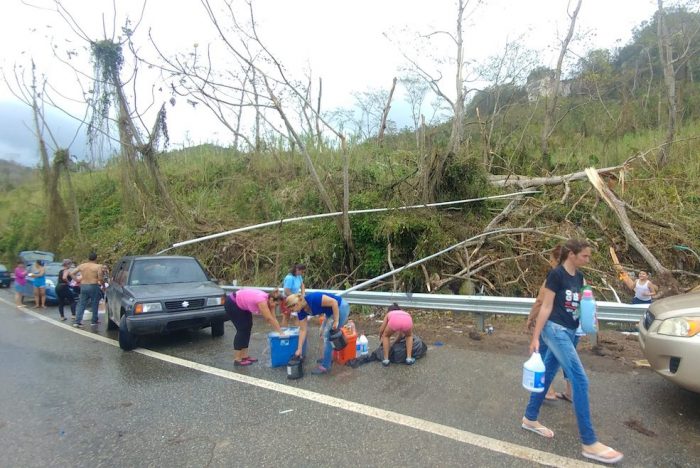 On the way back we encountered a heavy rainstorm like I had never seen before. Twice we had to stop to wait for the water to go down so we could continue on the road. To make matters worse it was water mixed with the mud rushing down from the mountains. Three elderly women had died in a home when a rushing mud water got into their home. That was very difficult for them. It took days before they could be buried.

While I felt safe in a tiny little car, the scene around me look like something from a movie on the end of times. Yesterday they had more rain and flooding and are expected to have more rain in the days to come. It’s almost like putting salt on a wound. My prayer is that people can find shelter and lives are spared. But it certainly does not make life any easier for them as they are trying to relive their lives. 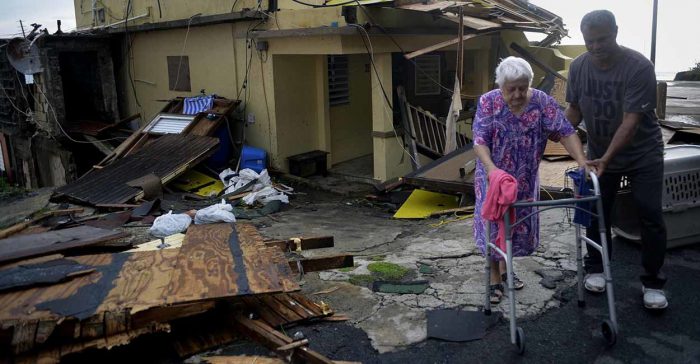 Saturday afternoon I went to La Perla. This is one of the poorest areas in San Juan. I had given the OFM Cap priest a donation for that community and they wanted me to meet and pray with the community. It was a very moving experience. As we entered the community, which is right off the ocean, there was a long line of people waiting for water, ice and food- the new “normal”.  As we made our way to a very modest chapel that was spared by the hurricane, I saw many homes totally destroyed by the storm. But, I also heard loud Puerto Rican music coming from a battery-operated radio, saw chickens and a beautiful rooster announcing life as they made their way through the narrow streets. There were a few people gathered at the chapel. Mass time had to be scheduled earlier because there is no electricity and the sun goes down earlier. To my surprise Archbishop Gonzalez showed up to celebrate mass. He wanted to visit with the people there. I received a very warm welcome by the people and heard many stories of what they have been through. My presence, I pray, reminded them that there are people in the mainland who not only pray for them, but are supporting them with donations. I spoke to them of your generosity. They were touched and so was I. I will be with them again next Saturday. They invited me to go early so they can show me around. I have another donation that I will take with me. I look forward to our visit, especially to a center for battered women.

Communication is difficult. I sent two days without Internet and it drove me crazy. Imagine three weeks. It is curious that the only communication I had was through my mom’s mobile phone.  This has made us aware of how much we depend on the technology and the difficulty of communicating to help or rescue those isolated by the storm.  Many people are leaving because they don’t feel there is an option. Elderly people are being displaced especially because of their health needs. This will have a significant impact on places like Florida and New York and New Jersey.

– The poor have blessed me and I hope you, through me

– I am learning detachment as I witness how quickly one can loose everything and cherish what is precious (relationships, family, memories, time in and with nature, etc.)

– I value the gift of presence even more

– While peeling potatoes I thought of those who grew, transported, prepared and were nourished by them. I felt part of a chain and God’s providence at work

– At the dispensary I prayed for those who had died and whose medications I was discarding. Their names were on the bottles. I could not help to imagine them

– From the trip to Utuado I learned that feeling helpless invites me to trust that I do what is possible and God will do the rest (I am not a Messiah). This mission is God’s project, not mine.

– From nature I have learned that it has the capacity to show us the natural way of living the paschal mystery. Every morning I go to the terrace a watch the sun rise. Some days the clouds get in the way, but sun is always there. Then there was a full red moon the other night that offered great light in a dark city. It shined on the ocean with such majesty!! And the sound of the ocean , which I so love, makes music that sometimes is soothing and other times rough.

– And finally there is the horizon that invites to imagine what is beyond, but for now I am here, and here is where God wants me and where I feel God so near!

In closing, the Mother Superior asked if could stay longer. After consulting with Jeff, I will stay until October 28. Jeff will join me on Oct. 21 and we will return home together. I am so happy to share this experience with him. And delighted that we can use the tickets we had purchased to come on Sept. 14 and were cancelled.

I am sorry for the length of the message, but I want you to know what together we have accomplished.  I am grateful that I was able to bring cash and give it directly to people through the priests in their communities.

Please continue to pray. Like I said before the recovery for 3.3 million people will be difficult and lengthy.. But in God’s providence we put our trust – and in those who incarnate it!!! And when possible, keep the pressure on our elected officials on issues that can make progress for our island possible!!!

Blessings to all and thank you for your journey with me,