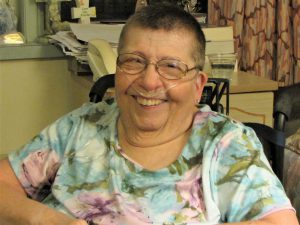 Oblate Associates in the U.S. now number more than 500 members in groups of 7 to 50 or more and they do a lot of good ministry. But in York County, Pennsylvania, there is a unique “group” which consists of just one Oblate Associate: Veronica “Ronnie” Ehrhart. Like her “group,” her story and ministry as an Oblate Associate is quite unique.

Born with cerebral palsy, Ronnie attended public schools and graduated from Baltimore’s Peabody Conservatory of Music in 1969. Her parents served as her caregivers while she pursued a successful career as a private music instructor. After the death of her father, she and her mother, suffering from lung cancer at the time, moved into Normandie Ridge (a Lutheran-sponsored Senior Living Community) in 2002.

Veronica has been an Oblate Associate since 2006 and has even attended National Gatherings in Belleville, Illinois.  Growing in her commitment to Associate formation and prayer seems to have led her into many new avenues at Normandie Ridge. The Pastoral Dept. has asked her assistance in welcoming and supporting Catholic residents.  As an Oblate Associate, going out to those most in need, has led her assist other residents one-on-one.

After going through the training to be a member of the York County PEER (Pennsylvania Empowered Expert Resident) Program, she has served as a member of the advisory board.  Recently, she had an experience of being a “voice to the voiceless.”

In September, Margaret Barajas, State Long-Term Care Ombudsman for the PA. Dept. of Aging asked Veronica to testify as a consumer before the House Aging and Older Adult Services Committee. In Pennsylvania, people receiving benevolent care from the State, such as Veronica, receive a designated allowance.  However, as this amount is not raised along with the cost of living, no raise has occurred for 10 years.  Therefore, with the rising costs of long-term care, spaces for low-income residents are being replaced with higher-end, private pay living spaces.  Her speaking before this subcommittee was the first time a “consumer” spoke to them.  Normandie Ridge facilitated Ronnie s appearance before the sub-committee by providing their driver and wheelchair-accessible van to make the 45-minute drive to and from the State Capital so she could testify. 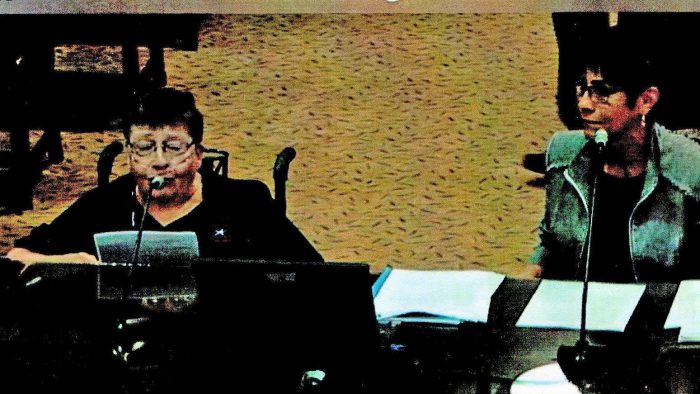 Veronica Ehrhart (on left) testifying before the Pennsylvania House of Representatives. Margaret Barajas is on right.

Ronnie testified about the many changes she has seen in her years in long-term care, changes that directly affect the quality of life for herself, and thousands of others in similar situations in Pennsylvania, and around the country. Hyper-inflation in health-care costs, pending and proposed cuts in government health-care programs, along with a rapidly-growing population of older Americans means that Ronnie spoke for many more than just her fellow residents in Normadie Ridge:

“There used to be over 50 residents in my Personal Care, and now it’s down to 9 of us, because they were converted into private pay apartments.

There is internet access there but I don’t have it. Five years ago I had to make a choice between having a telephone or television. So I chose a phone to be able to have privacy on calls instead of using the one in the office.

When my home opened up the memory care unit, our most skilled direct care givers were transferred over. We had to adjust to new care givers who were unfamiliar with my needs.

I’m sharing this because many people are unaware of how challenging it can be to live in long term care when you have multiple needs. Even being here today was a challenge, but I’m grateful to be able to. Please represent our needs. “

After her statement, Ronnie took questions from 13 members of the sub-committee before returning home.

Like all Oblate Associates, Ronnie is deeply inspired by the charism of St. Eugene de Mazenod and his concern for the poor in their many faces. Her commitment, like theirs, is to try and make a difference, one Oblate Associate at a time.