By J. Michael Parker,  Originally Published on the Oblate School of Theology Blog 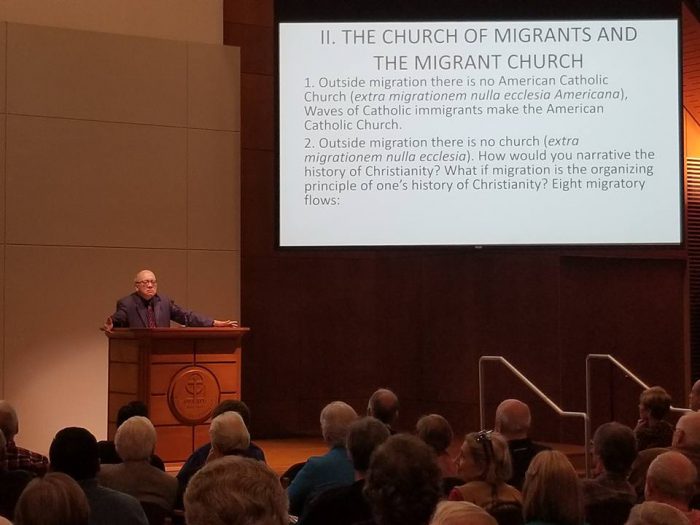 He said that Christianity always has had and always will have multiple centers rather than just one. The first Christian missionary efforts – to both the West, in the Roman Empire, and the East, in the Persian, Indian and Chinese empires – resulted in Christianity flourishing in many different parts of the ancient world.

Today, the plural expression “world Christianities” refers to historical, sociological, cultural and theological diversity and multiplicity within Christianity from its beginning, throughout its history and perhaps more so in the future. Fr. Phan said the legitimate concern for unity of the church after heresies and schisms and during the centuries of consolidation of papal power has masked this far-reaching ecclesial diversity and multiplicity in favor of an imagined and often enforced uniformity.

Fr. Phan observed that worldwide migration has changed the faces of religious communities, especially Christian ones, and especially in the United States. “There is a strong correlation between migration and the emergence of world Christianity, since Christianity’s expansion and establishment as indigenous churches throughout the world was brought about mainly by the migrants themselves, and not the apostles and their successors,” he asserted. Migration poses enormous challenges economically, socio-politically and culturally for countries of origin, countries of transition and countries of destination, the professor added.

“We live in ‘the Age of Migration,’ the priest commented, observing that 232 million people lived outside their countries of origin in 2013 – more than the population of most countries. He cited a 2012 study indicating that nearly 640 million adults would want to migrate if they had an opportunity to do so. A United Nations Refugees Committee report found that a record 65.3 million people were displaced by 2015. They are beset by a host of immense tragedies: loss of land and home, family separation, physical suffering, sexual violence, psychological damage, lack of educational opportunity, uncertain future and death itself.

Dr. Phan said that sociologist Saskia Sassen has identified three emerging patterns that constitute “epochal” change: a sharp increase in migration by unaccompanied minors from Central America; the expulsion of Rohingya refugees, a Muslim minority, from Myanmar in order to grab their land; and the migration of war refugees from Syria, Iraq, Afghanistan and several African countries toward Europe.

“The polycentricity of Christianity and the Age of Migration constitute the most burning, intractable issues for contemporary Christianity, and therefore, for contemporary ecclesiology,” Fr. Phan warned. “Because migration exacerbates the diversity and multiplicity of world Christianity, it poses no less complex and hitherto unimaginable problems to the church, especially in terms of ministry to the newcomers.”

When he said that “outside of migration, there is no American Catholic Church,” a definitive historical statement, he pointed out that between 1820 and 1860, the U.S. Catholic population grew from 195,000 to more than three million. The American Catholic Church would not exist without migration and migrants. Native American and Mexican Catholics were here before the United States; Spanish and French missionaries brought Catholicism to parts of what is now the United States. The American Catholic Church as such began in 1634 with the arrival of English Catholics in Maryland. Waves of migrants from Ireland, Poland, Germany, Italy, France, for example, poured into American society in the 19th century, making Catholicism the largest single Christian denomination in the country.

The Immigration and Nationality Act of 1965 opened doors to immigrants from Asia, Africa, the Middle East, and Southern and Eastern Europe. In the 1970s, wars and political turmoil in various lands brought large numbers of immigrants from China, Korea, the Philippines, Vietnam and Central America. Many were Catholic, and Catholic migrant families brought with them new ways of being Catholic. More came from Latin America with their own different ways of being Catholic.

Fr. Phan took his thesis further, asserting that outside migration, there is no church, period. He cited eight major migrations as being far more pivotal in spreading Christianity worldwide than decisions and actions by church leaders, divisions between East and West, the Protestant Reformation or ecumenical councils.

The first Christian migration transformed Christianity from a Jewish sect into a worldwide migrant institution after the destruction of the Second Temple in 70 AD. Then the Christian community left Palestine, some by force and others voluntarily – to Mesopotamia, Syria, Greece, Asia Minor, and finally the Western Mediterranean, North Africa, Spain and France, and then to Egypt, Afghanistan, Pakistan, India and China, Fr. Phan said.

The third migration followed Constantine’s moving the seat of the Roman Empire to Constantinople and spawned Eastern Orthodox expressions of Christianity; the fourth involved the Germanic tribes and the fifth followed the discovery of the New World under the aegis of Spain and Portugal. From 1650 until World War I, various wars, the emergence of empires and nation-states, and Europe’s search for new wealth fueled enormous migrations, both forced and unforced. Each brought new ways of being Christian.

Recent wars in Iraq, Afghanistan, Lebanon and Syria also have caused massive migrations. The Iraq war in particular devastated ancient centers of Christianity and reduced Middle Eastern Christianity to rubble. Globalization and the ease of international travel have made international, transnational and transcontinental existence a fact of life, Fr. Phan said.

Christianity is becoming more diverse than ever, he continued, thanks to the shift of the Christian population from the global north to the global south and the movement of migrants from everywhere to everywhere on all six continents.

The professor explained that early Christians greeted each other as foreigners and immigrants in their own land. They don’t live apart or speak a different language, from other natives of their land, but their moral behavior and their religious view sets them apart, making them countercultural and subjecting them to persecution.
“The motivation for such behavior of returning good for evil is hope, the virtue par excellence of migrants,” Fr. Phan said. Their hope is not for worldly gain but heaven. He stated that only a church that is conscious of being an institutional migrant and caring for all migrants can truly practice faith, hope and love.

This, he said, is a Christological theology of church. Reading part of the Letter to Diognetus, an anonymously penned writing from the second or third century, which he urged listeners to read on the Internet. The theology of migration proposed in the letter is based on a theology of the migrant’s life as an imitation of Christ.

“Jesus is the paradigmatic migrant who dwelt between the borders of two worlds. Through the Incarnation, ontologically, he stood between divinity and humanity and embraced both; as a child, he experienced migration to Egypt; as an adult, he lived between colony and empire; culturally, he lived between Roman and barbarian; linguistically, between Aramaic and Greek; religiously, between the Chosen People and the goyim – that is, between the Jews and Gentiles. During his ministry, he was homeless, and his migration carried him over all kinds of borders,” he said.