On 25 October 2017, the General Service of Oblate Communications introduced the new omiworld.org website of the world. Fr. Louis LOUGEN, the Superior General, officially launched it at the General House in Rome before the presence of the community of the General House and the International Scholasticate. 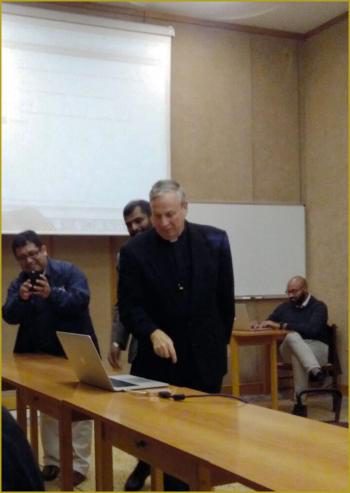 The event also marked the entrance of Fr. General into the world of social media as well. Now he has his own Facebook page: Louis Lougen omi. With that, he hopes to build a closer relationship with the Oblate family around the world, and especially the young Oblates and seminarians.

During the ceremony, Fr. Shanil JAYEWARDENA, the director of the Oblate Communications Service also revealed the future ‘birth’ of a mobile application called “OMI app”.

All these steps are a direct response to the call of the last General Chapter about the necessity of Oblate involvement in the field of media and communication for evangelization. Chapter V of the final document of the 36th General Chapter, “Mission and Social Media”, was a reflection on that topic alone.