By Lauren Caruba , Originally Published by the San Antonio Express-News 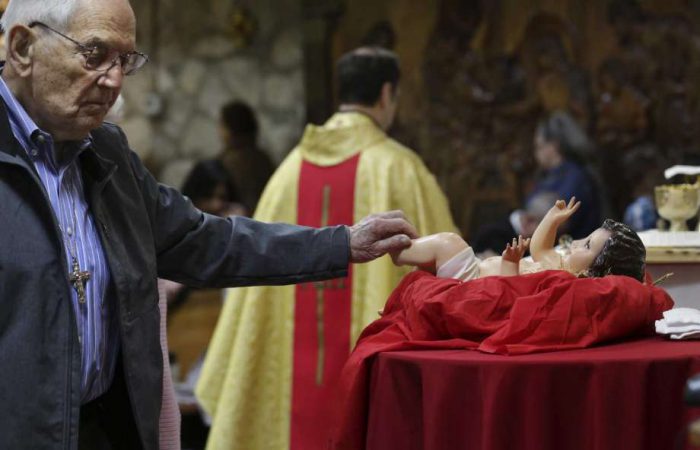 Michael Rolirad touches the feet of the infanct Jesus after receiving communion as congregants gather Christmas morning for Mass at Our Lady of Lourdes Grotto and the Virgen de Guadalupe “Tepeyac de San Antonio” on the grounds of the Oblate Missions on Monday, Dec. 25, 2017, but with such low temperatures, the service was held inside. Photo: Bob Owen, Staff / San Antonio Express-News

The Smith family usually attends Christmas Day Mass at the Oblate Missions, home to Our Lady of Lourdes Grotto and the Virgen de Guadalupe Tepeyac de San Antonio, to enjoy both nature and God.

The service is usually held outside, in front of the grotto sanctuary, under a canopy of trees. The family appreciates the intimate, relaxed atmosphere.

“It’s not a very pretentious church — it is under the trees,” said Patricia Smith, 50. “Very, very close to nature and therefore close to God.”

On Christmas morning this year, it was too cold to hold the service outside. Just before the 9 a.m. service, the temperature was less than 40 degrees. Nevertheless, Smith, her husband, Scott, and 9-year-old son, Thaddeus, came anyway. The Mass was held instead inside the small chapel adjacent to the grotto.

Another, larger service was held in Spanish at 11 a.m. in the nearby pastoral center. The Mass took place on the backdrop of an elaborate figurine village, flanked by Christmas trees.

During the first service, Father Leo Perez reminded a congregation of about 60 people that Christmas is a time for opening their hearts to Jesus and those in need. He talked about the Hispanic tradition of holding a posada, which includes a re-enactment of Mary and Joseph’s journey to Bethlehem, followed by a fiesta.