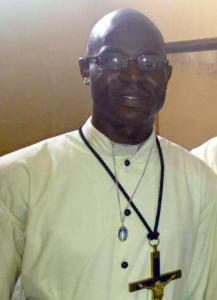 The first Angolan Oblate, Paulo Sango PINDALI, recently made his perpetual profession of vows. Here is the story of his vocation as he himself tells it:

I am Paulo Sango Pindali, born in Lobito / Benguela (Angola) on 1 November 1988. Coming from a Christian home. I benefited greatly from the education received from my parents Zeferino Pindali and Dionisia Afetina. I am in fact the fifth in a family of ten children, including eight boys and two girls. It should be noted that three of my brothers are no longer part of this world because they were victims of the 1999 and 2001 war.

From 2001 to 2007, I studied the humanities, interrupted by military service. These studies were done in two stages: first at the minor seminary of Notre-Dame de La Salette, at Catumbela; then, due to the war, at the Lobito Pre-University Center. After my studies, the institute chose me to be one of those who had to do first aid training. Let me point out that when I was in the minor seminary I had always wanted to become a priest. But after my departure from the seminary this dream had disappeared, because of certain influences in the school where I continued my studies.

It all began again in November 2007 with the vacation of my half-brother, who was a Trappist monk. When he returned to the monastery in January 2008, he asked me to accompany him. As the monastery was only 30 km from the house, I gladly accepted. On arriving at the monastery, it was already late, so Father 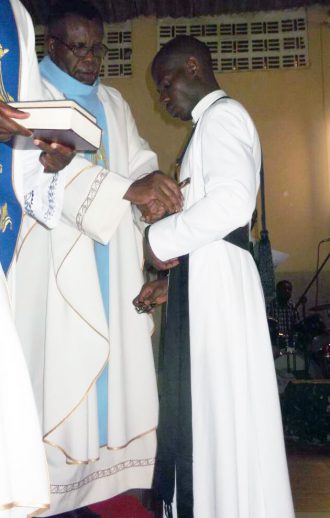 Prior, Barnabe Sawango, a friend of my family, said to me: “Paulo, our neighborhood these days is really packed with bandits; spend the night here because it is already late and tomorrow one of the brothers will accompany you to your work place at the Soba Catumbela beverage factory”. I was not happy, but I agreed to spend the night at the monastery, all by myself, for my brother was no longer there to look after me. He had returned to the monastic cloister.

At 6 pm, they invited me to prayer; when I saw and heard the monks singing, I had goose bumps and I wanted to stay with them on the spot forever. Back home I asked my parents if I could become a religious, and the answer was positive. A few weeks later, I spoke with Father Prior about joining the monastery; he gave me six months to look it over, without losing my job. In the morning I went to work, from 7:30 to 12:30, counting the cases of beer; and in the afternoon, I returned to the monastery. But during this experience, I felt that my place was not there, because we were not allowed to come into contact with anyone.

One afternoon, the Prior asked me to clean the monks’ recreation room; while I cleaned, I was curious enough to read some of the magazines that were on the table. This is how I came across a magazine that talked about various congregations, among them Missionary Oblates of Mary Immaculate in Brazil. Impressed by their charism, that of evangelizing of the poor, the poor with their many faces, I immediately began to look into this congregation

The next day I shared the fruit of my reading with the Prior, asking him at the same time to help me to get in touch with the Oblates of Mary. Now he already had a plan for me to begin my monastic formation in Spain or in France. Far from his suggestions, I wanted to consecrate myself as an Oblate missionary. I asked him to find me the address of the Oblates. Discouraged and even angry, he gave me the number of an Oblate who lived in Luanda. After my contact with him, this Oblate asked me to join him in Luanda for a community experience. 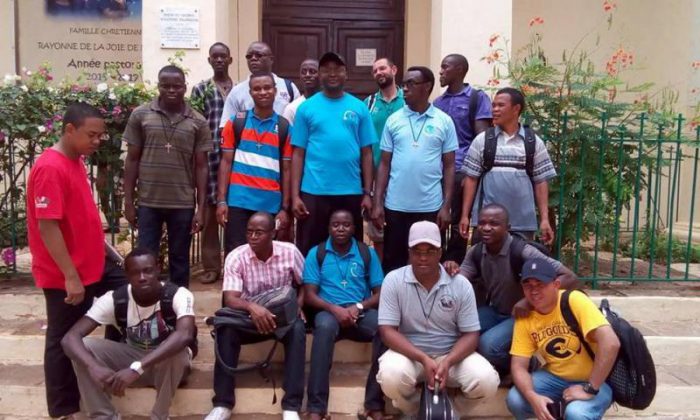 Thus, from 2008 to 2010, I did my stages as an aspirant and pre-novice in Oblate communities and to learn French.

After my novitiate in Ifwanzondo, Congo, I made my first vows as an Oblate in 2011. From 2011 to 2014, I did my philosophy studies at the major seminary St. André Kaggwa, of the Archdiocese of Kinshasa. From 2014 to 2015: a canonical internship (regency) in the community of the Immaculate Heart of Mary of Ifwanzondo. At the end of my regency, I was sent to the scholasticate St. Eugene de Mazenod for theological studies. And on 16 September 2017, I made my perpetual vows in Luanda. As of today, I am in the third year of theology. And that is a brief history of my religious vocation.