By Mary Kunz Goldman, Originally Published by The Buffalo News 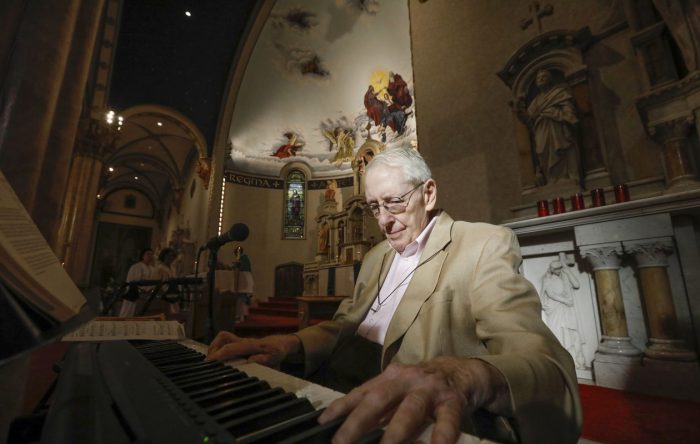 His arthritis prevents him climbing upstairs to the organ loft these days, so Bob Chambers plays the keyboard during Mass at Holy Angels Catholic Church, where he has been the organist for more than 70 years. (Derek Gee/Buffalo News)

Holy Angels Church, which has towered over Porter Avenue since 1875, was built to last.

The church’s organists are, too.

Robert Chambers, Holy Angels’ current organist, has been on the job for 70 years. In October, he announced his retirement, effective at the end of this year. But his fellow parishioners have been trying, with some success, to persuade him to rethink that decision. After all, if Chambers retired, it would mean the end of an era. His mother, Frances, held the job before he did. She was appointed organist in 1912.

That is well over a century’s worth of “Holy God, We Praise Thy Name,” all played by an organist named Chambers. Not to mention Latin hymns. In 1947, when Bob Chambers made his debut, the Mass was still in Latin, and would be for another 15 years.

CLICK HERE to see the rest of the article on BUFFALONEWS.COM