Q: Please describe how you became acquainted with the Charismatic Renewal in the Haitian Community. 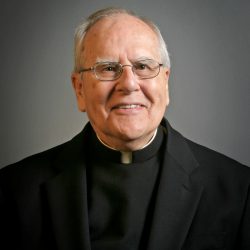 Fr. Morin: My first obedience after ordination in 1951 was to Haiti.  I spent 40 years there. Sometime in the late1960’s or early 1970’s, I heard that a layman, Gilbert Dabady, was holding a Charismatic prayer service in his back yard every Friday.  Curious, I wanted to meet him , so I attended the prayer service.  It was growing each week.  It was he who introduced me to the Life in the Spirit Seminar, which I had read about before. I made it under his direction and then became a leader in administering it.

He had asked several priests to help him, and all declined.  Then in 1991 I was asked by the Oblates to go to Tahiti and help prepare their candidates for the seminary. I spent about six years there.  Then Cardinal Law of Boston asked the Oblates to furnish a priest to work with the 200,000 Haitian Catholics in the Archdiocese of Boston.  I accepted, and discovered that Gilbert Dabady was already here, gathering the Haitian Catholics and introducing them to the Charismatic Renewal.  His hymns and songs had become very popular.

I saw that the Charismatic Renewal is tailor-made for Haitians.  They are a very emotional people and love to sing.  We started out in Mattapan (St. Angela’s Church) and Dorchester (St.  William’s).  There was almost a pattern:  we would meet in a small chapel, then grow into the church building itself.  First Gilbert would gather the Haitian Catholics and form a community, then he would send some of the lay leaders he had already trained and they would train others.  Quickly we would offer the Life in the Spirit Seminar. We spread to Brockton, Cambridge, Chelsea, Lynn, Salem and Somerville.

I was meeting with the eight pastors at least monthly,  to help them appreciate the life of the Haitian Community and what it could bring to their churches.

Remember that many Catholics know this movement as a healing service.  I develop a prayer service where I would preach about the power of Christ to heal.  I would carry the Blessed Sacrament in the monstrance down the aisle, and people would reach out from the pews to touch the monstrance, crying out for healing.  Or they would bring photos of their sick relatives back in Haiti, and ask for them to be healed.

I witnessed many examples of healing, but two stand out.  One was a crippled man, who after several months of attending services, and not being cured, was crying out “Lord, you healed others, why not me?”  And those in the other pews would shout, “Lord, yes, why not him?”  Then during a service he was healed and threw away his crutches.

Then there was the blind woman, who  was shouting out “Lord, let me see,” and the people were joining her.  After several services, she cried out “Lord, I can see!”  I urged her to go to her doctor, and he was stunned that she could now see.

My homilies centered on Christ as the healer.  I worked Old Testament healing events into my homilies too.  Pastors were really impressed when they say the healings themselves!

A pastor from Providence, RI approached me to help him find a Haitian priest to minister to the Haitians there.  I found a diocesan priest from Haiti to help him, and Gilbert and I helped him start a prayer group.  Since Gilbert’s was on Friday night, we had the first prayer group in Providence on Tuesday night.  We would have a convoy of three cars driving from Boston to Providence, with our lay leaders training their lay leaders.

Then a young Franciscan priest from Philadelphia heard about the success in Boston, and he asked me to find a Haitian priest for him.  I had become close to a Montfort bishop in Haiti, and when I approached him, he said he wanted to see the situation in Philadelphia himself.  We spent a week together in Philadelphia.

About 2011, I was asked to go to New Orleans and organize the ministry there with the Haitians.  At the same time, a Haitian priest raised in Brooklyn, NY and trained by the Josephites arrived.  The archbishop asked us to work together, and it was a joy.

We had a hard time finding a home for the Haitian  Community, but eventually we did.  He and I alternated with a Sunday night Charismatic Mass, which became very well known.  It has attracted a number of Protestants.

I’ve warned every Haitian Charismatic group here not to do crazy things.  In Haiti, some of the customs are different.  They would not be acceptable here in the USA.  I have done this continually, and it seems to have been followed.

I left New Orleans in 2015, for our residence here in Tewksbury.

Q: Did Gilbert ever marry?

Fr. Morin: Yes, he married a woman from one of the Haitian US Charismatic groups, and they have several children.  He travels a great deal to places like Tahiti and Africa.  He has trained some remarkable leaders who help him in the Boston area. (Note:  His hymns, songs and charismatic ministry are describe on the internet when one googles his name).

Father Morin, when our five pre-novices from Bishop Fallon Residence, Buffalo, NY visited here for Thanksgiving, and our superior, John Hanley, OMI, asked you to talk with them on Nov. 24 about your ministry, you really impressed them. I’m sure that the pre-novices, every Oblate here, and every charismatic Haitian, is joining together in prayer for you.