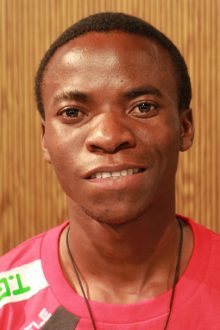 Five years ago Joseph Saukani had a difficult decision to make about his future.  He was having success as a professional soccer player in Zambia, but at the same time he had a powerful calling from the Church.

His friends all told him that he should stay with soccer, that he could make good money.  After visiting with the Oblates, Joseph decided that he had to listen to his heart.

“I left soccer behind and joined the Oblate formation program,” said Joseph.  “I had to be happy, and I was most happy with the Oblates.  I have never regretted my decision.”

Joseph was born in Kabwe in the Central Province of Zambia in 1990.  His parents had ten children and he is the ninth born.  As a child Joseph served many years as an altar boy and his interaction with the priests started a feeling inside of him that he might have a calling to religious life.

“It was during my primary education when I first felt the call to the priesthood.  The feeling at the time was not real strong but it kept developing as I grew older,” said Joseph.  “When I completed my secondary education my vocation call became very strong.”

But something was in the way of that calling to religious life – soccer.

Joseph was a star soccer player in high school and the money and fame of a professional career was too enticing to pass up.  For five years Joseph played professional soccer but there was always the nagging feeling that life should be more than playing a sport.

A former novice of the Oblates, Nchimunya Bbuyumba Haakdakata, introduced Joseph to Fr. Ron Walker, O.M.I. the Vocation Director for the Oblates in Zambia.  They kept in touch for two years until Joseph decided that it was time to leave soccer behind and pursue his calling to the priesthood.

Just 27 years old, Joseph’s personal and spiritual journeys have taken him around the world, and to very diverse environments.  Joseph says he is in a very good place now, because he is happy.

“Life is all about happiness,” said Joseph.  “I have chosen a life with the Oblates that I am confident will make me the happiest person I can be.”