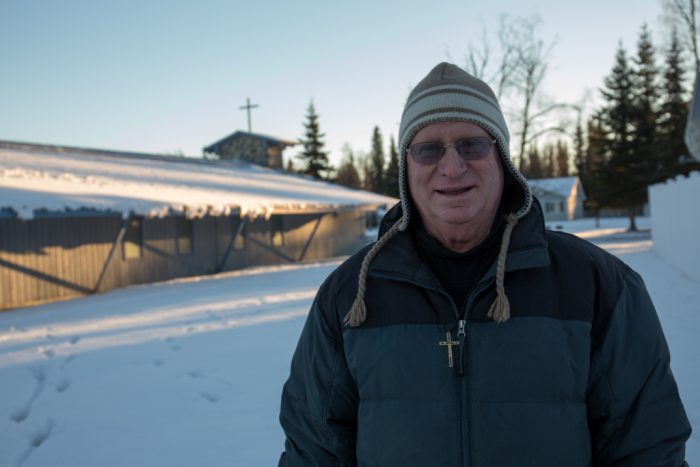 Although his wardrobe and environment may have changed dramatically during 52 years as a Missionary Oblate priest, Fr. Roger’s missionary spirit has remained remarkably the same – to seek out those in need and make their lives a little better.

Father Roger was born in 1937 in Arkansas City, Kansas.  He grew up on a farm tending to the cows, hogs and chickens.  In the eighth grade, a severe drought hit Arkansas City and Fr. Roger’s dad had to take a job as a carpenter.  Father Roger dropped out of school for a year to manage the farm.

Now a year behind in school, and admittedly not too interested in academics, the teenager felt trapped.  When an Oblate visited the area to inquire if any boy was interested in the seminary, Fr. Roger jumped at the opportunity to leave the farm and make his mark in the world.  Just eight days after the vocation priest arrived in Arkansas City, Fr. Roger was on his way to the Oblates’ Our Lady of the Ozarks minor seminary in Carthage, Missouri.

The path to priesthood wasn’t always easy.  At age 18 Fr. Roger was struck with an unknown debilitating illness that inflamed the joints in his legs.  He was on crutches for a year and fluid had to be periodically removed from his joints.  During his year of confinement, Fr. Roger turned inward, trying to figure out what God was calling him to do with his life.

After his ordination in 1964, Fr. Roger requested that he be sent to the Oblate mission in Recife, Brazil.  But his superiors thought it was too risky for a new priest.  It was a troubling time for the Oblates in Brazil, who were being harassed by the government for their unwavering support of the poor.

He was first assigned to teach at the Oblate scholasticate in Mississippi and then served as a Vocation Director for the Midwest.  In 1972 he got his first real test of climate change when he was assigned to St. Thomas Aquinas Parish in International Falls, Minnesota.  Known as the “Icebox of the Nation,” International Falls has an average high temperature in January of 15 degrees and an average low for the month of -6 degrees.

In 1981, at the age of 44, he finally got the assignment that he had been dreaming about since childhood – Recife, Brazil. The city on the north coast of Brazil would be his home for more than 20 years.

“Brazil changed me forever,” said Fr. Roger.  “I became a much different person, and I believe a better person, because I went to Brazil.”

The poor are not hard to find in Recife.  In the urban areas they live in favelas, where homes are little more than makeshift shelters made of discarded building materials.  In the countryside, many live in small communities of workers on sugarcane plantations.  Father Roger was at home in both locations.

In Recife the Oblates had become legendary as champions of the poor.  They were constantly speaking out against those in power who took advantage of the less fortunate.  Father Roger jumped right in, protesting government agencies, utility companies and private companies. He got roughed up several times and made some enemies, but made many more admirers.

When he moved outside of Recife to work with plantation farmers in Jussaral (Jerusalem), he railed against wealthy plantation owners who lived in mansions while their workers lived in one-room dwellings with dirt floors, no electricity and no running water.  Despite their overwhelming poverty, Fr. Roger was amazed how the families still found much joy in their lives.

“By working in Brazil I got a better sense of global humanity,” said Fr. Roger.  “The Brazilian people’s lifestyle and way of celebrating life are often closer to the Gospel than in the United States.  Too often in the U.S. the value of life equals success; in Brazil, it equals happiness.” 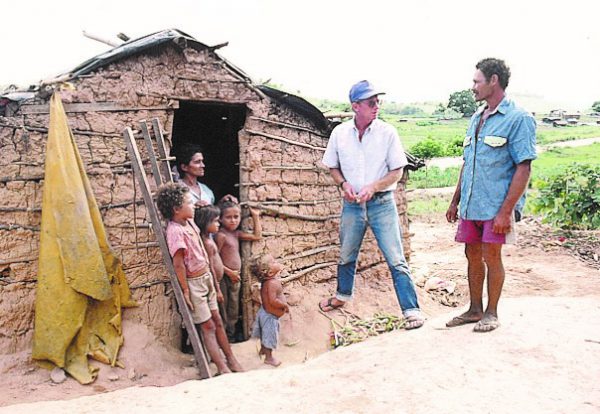 Fr. Roger (wearing blue cap) some years ago in Brazil

In Brazil, Fr. Roger met many people that he considered living saints.  One of them was a woman named Colletta.

Colletta, who was originally from France, came to Brazil to work as a nurse.  She eventually settled in Jussaral where she focused her energy on improving the lives of poor women and girls.  She built schools and provided refuge to street children.

Father Roger helped Colletta as much as possible with her outreach ministries.  He even built a small chapel behind Colletta’s house.  Often, Colletta and Fr. Roger would sit in the chapel, praying and planning how best to bring justice to the poor in Jussaral.

“The last time I met Colletta she asked for Eucharist,” said Fr. Rodger.  “I took her face in my hands and told her, ‘Colletta, you are Eucharist!’  She smiled widely and gave me a hug… what a God-Moment.”

After more than 20 years of “God Moments” in Brazil, Fr. Roger decided it was time to return north, way north.  After a brief time back in International Falls, he accepted the challenge of ministering on the Kenai Peninsula in Alaska.

The Oblates arrived on the Kenai Peninsula in 2007.  Prior to their arrival, there was no permanent priest living or working on the peninsula which had four Catholic parishes.

Today Fr. Roger is part of a team of Oblates who rotate between the four parishes.  Travel can be a problem as there is only one main road on the Peninsula and parishes can be more than 100 miles away.

The activist that was born in Fr. Roger in Brazil has been resurrected in Alaska.  Much of his Alaskan activism has focused on environmental issues.  Big businesses such as oil and timber have shown little interest in environmental regulations.  Overfishing by large companies has caused extensive damage to the fish population and created many hardships for the local, small scale fishermen.

In the parishes, Fr. Roger has focused much of his work on reaching out to people on the peripheries of society.  He is active in programs for people dealing with drug and alcohol problems.  He counsels prisoners, and promotes programs to prevent domestic violence and suicide.

Father Roger also oversees a men’s ministry where a group of men gather every Friday morning to discuss ways to improve their lives.  Issues such as raising children and finding jobs are addressed by the group as well as how to improve their spiritual life.

“I view my job as simply helping people solve their problems,” said Fr. Roger.  “If we can solve a problem through faith then I help that way.  If we can solve the problem in a different way, we try that.  I’m willing to help any way that works.”

Solving problems is something Fr. Roger Bergkamp has been doing all of his life.  From a farm in Kansas, to the slums of Brazil, to the wilderness of Alaska, Fr. Roger has always been a problem solver.  He may not have changed the world, but he has meant the world to thousands of people blessed by his ministry.

A life filled with God-Moments.