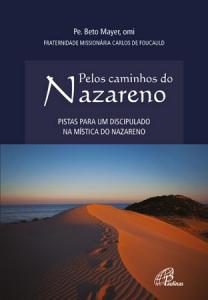 On the afternoon of November 17, the Province of Brazil rejoiced with our brother, Fr. Beto MAYER,  who officially launched his book: Pelos caminhos do Nazareno [The Paths of the Nazarene] at the Paulinas Bookstore in the center of São Paulo.

A great number of people were present to honor our brother, to ask for his autograph and to congratulate him for this important moment. Several groups were 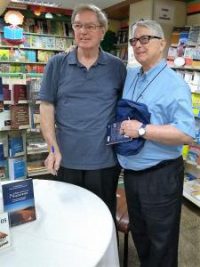 represented: the Oblate Province of Brazil by Fr. Francisco RUBEAUX,  Provincial, and other Oblates; the Southeast District of the Oblate Province of Brazil by the newly elected animator, Fr. Genivaldo CORDEIRO DE OLIVEIRA; and the Conference of Religious of Brazil, São Paulo section, by its President, Fr. Rubens Pedro CABRAL. There were also members of the missionary Fraternity Charles de Foucald, founded in 1980 by Fr. Beto Mayer.

Speaking briefly about the book and Fr. Beto, the former monk Mauro Lopes, who was one of the great collaborators in the realization of the work, spoke about how much the book is a faithful reflection of the life and missionary testimony of its writer: “Beto lives what he writes, and writes what he lives.”

Soon after, Fr. Beto spoke a few words of his happiness in launching the book, and he sang a mantra of thanks to God. Then there was a time for Fr. Beto to sign the book; this was followed by a cocktail. (Deacon Sérgio DE SANTANA)

Editor’s Note: Fr. Robert Mayer, OMI is a native of Buffalo, NY, alumnus of Holy Angels High School, and was ordained at the Oblate Scholasticate in Washington, DC on May 31, 1965. Since then he has spent his years in Brazil.  In a letter to Fr. Harry Winter, OMI, Fr. Mayer talked a bit more about his book:

“My book Pelos Caminhos do Nazareno (In the Footsteps of the Nazarene) was the result of the many years of our Retreats, Missionary Spirituality Encounters and Parish missions  of our          ministry here.

Our Fraternidade Missionaria Carlos de Foucauld (Missionary Fraternity of Charles de Foucauld) began here in Brasil in 1980. Charles died without fulfilling his dream to found a religious congregation. Soon afterwards there arose five new congregations and ten families associated with his spirituality. Our small and simple Brasilian fraternity was considered lone of these ten families. There are 65 members in this community.”