Originally Published by The Boston Pilot          (Re-posted with permission) 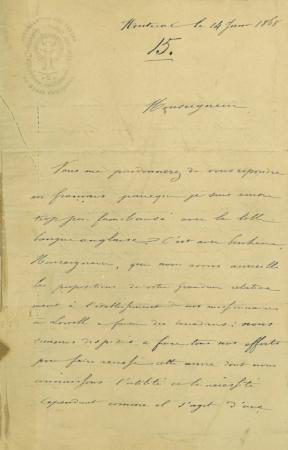 The 1868 Letter From Father Florent Vandenberghe, Provincial Superior Of The Oblates Of Mary Immaculate, To Archbishop Williams Discussing The Possibility Of The Oblates Establishing A Parish In Lowell To Serve French Canadian Catholics. (Pilot Photo/Courtesy Archdiocesan Archives)

… Father Vandenberghe traveled with Bishop Williams to view the site, but expressed some concern about the ability of the

small French Canadian population there to sustain a parish of its own.

In the papers of Archbishop John J. Williams resides a letter from Father Florent Vandenberghe, OMI, provincial superior of the Oblates of Mary Immaculate based in Montreal, dated Jan. 14, 1868. The letter references a meeting the two had in Burlington, Vermont, the previous month, and the prospect of the Oblates establishing a parish in Lowell to serve the French-speaking Canadian Catholics residing there.

Father Vandenberghe and Bishop Williams met in Burlington, Vermont, while attending the dedication of the Cathedral of the Immaculate Conception. For some time Bishop Williams desired to create a parish in Lowell to serve the French-speaking population, and bring additional religious orders into the Diocese of Boston; while in Burlington he was introduced to Father Vandenberghe who could help him achieve both. The Oblates had arrived in Montreal in 1841, and since that time achieved much success with their missionary work in Canada, and had even expanded into the Springfield, Massachusetts, area.

In his letter, written in French, Father Vandenberghe reveals that he has written to the superior general in Europe informing him of their conversation and believes they will receive his support. He also indicates that, for the moment, he only has two priests who will be able to depart in April, at the earliest, after waiting out the winter. Finally, he presents some conditions necessary for the Oblates to operate a parish in Lowell.