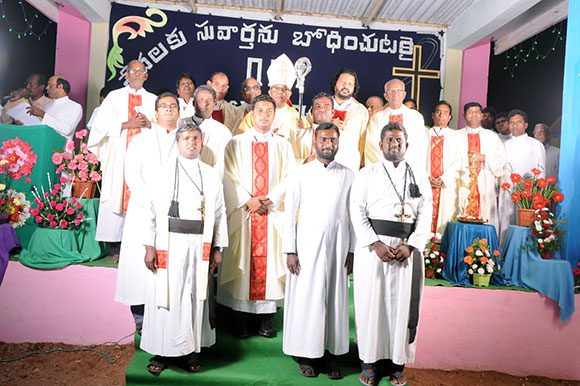 The Indian Oblate Mission was founded 50 years ago by the then Provincial of Sri Lanka, Fr. Anthony Fernando, O.M.I.  The first two pioneer Oblate missionaries, Frs. Emmanuel Mariampillai and Stanislaus Philips, set foot in India on June 29, 1968.  They were officially installed in a simple ceremony by the Archbishop of Madras-Mylapore, Most Rev. Dr. R. Arulappa, on July 1, 1968.

Since this time, the Oblates have made it their goal to work toward religious harmony in India.  Top of FormThe country has long been known for its diversity, with its people splintered into thousands of sects based on narrow religious and ethnic grounds.

“We grow and live as ‘Indian Oblates,’ not as Oblates of Tamil, Telugu, Hindi origin or with any other divisive forces of caste, language or color,” said Fr. Francis Nallappan, O.M.I. former Provincial of the St. Eugene Province of India.  “We respect and dialogue with people of all religions and cultures.  This is a big calling for us as Oblates.”

Part of the Oblates’ religious harmony outreach was out of necessity, since only two percent of the people of India are Christians.  An even more important reason was to live out the Oblate charism to serve those who are the poorest and most abandoned, no matter their religion or culture.

The Indian Oblate congregation has steadily grown since 1968, and in 2010 they were elevated to the status of Province.  Today there are around 100 Oblate priests and brothers serving in the country.  Vocations are strong, with over 20 Indian seminarians and over 100 students in first formation.

“Starting new missions is a clear sign of growth and vibrancy of our missionary charism,” said Fr. Francis.  “The cultural diversity in these new areas is creating a truly Indian identity for the Oblates.” 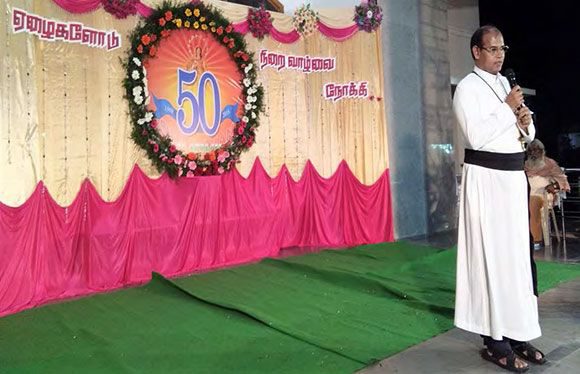 The current Provincial of the Province of India, Fr. Chinnappan Sandhappan, wrote in the province newsletter, BORN, a letter announcing the inauguration of a year-long celebration of the 50-year presence of the Missionary Oblates of Mary Immaculate in this vast country.

Below are excerpts from his letter:

My dear brother Oblates, greetings in the Lord!

Having culminated meaningfully the bi-centenary celebration of our congregation in April 2017, we, the Oblates in India, step into another milestone in the history of our Indian Province: the 50th year of our Oblate presence in this land of diversity of language, culture and faith.  This year of Golden Jubilee was inaugurated on the 29th of June 2017, at our pioneering mission in Kancheepuram. It will continue to have its different phases of celebrations at community, parish, mission and formation/formative levels until the 28th of June 2018.

As we commemorate this significant event our hearts reflect on our legacy etched with faith, being mindful that, “Unless the Lord builds the house, its builders labour in vain” (Ps 127/1). We thank the Lord for the innumerable ways in which He has nurtured our province in its pilgrimage with the poor with their many faces and for giving us men who are committed, dedicated and ready to serve the needs of the province in many ways. Their generosity has led our province to open up new and flourishing missions and communities in various parts of India.

On this joyous occasion, we remember with sincere gratitude our pioneering missionaries from Sri Lanka who sowed the seeds of the Oblate charism untiringly through their missionary zeal and commitment, and the many Missionary Oblates who followed them. We too recall and give thanks to God for all our benefactors (Oblates and non-Oblates), Missionary Associates (MAMI), friends and well-wishers who have constantly supported us through their financial assistance, prayers and encouragement in our mission to the poor, the most abandoned, the children, youth, women and elderly for the past 50 years. We remember them all gratefully and avow them of our continual prayers.

As the Oblates in India celebrate this momentous 50-year Anniversary, please remember them in your prayers.  They have grown by leaps and bounds, and God-willing, will continue to grow and break boundaries for the next 50 years to come.