By Will Shaw with Geri Furmanek, National Director of Oblate Associates

Prior to beginning the Retreat, the Associates enjoyed a continental breakfast 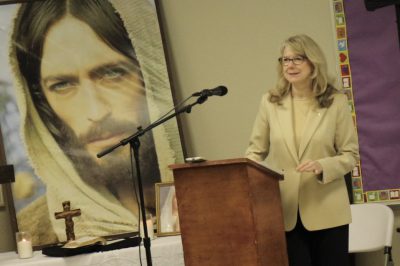 Some 22 new Oblate Associates, who completed a year-long formation program made their first Commitment at the Saturday evening Mass January 27th at St. Joseph’s Parish in Eagle Pass, TX. Pastor, Richard Kulwiec, OMI, celebrated the Mass and presented the Associate Crosses to the new Associates. In addition,  four more Associates renewed their commitment.

The Commitment Ceremony was the culmination of a Day of Retreat for Oblate Associates led by Geri Furmanek, National Director of Oblate Associates, who traveled to Eagle Pass from the headquarters in Belleville, IL. The Retreat focused on  facets of the Oblate Charism and spirituality. 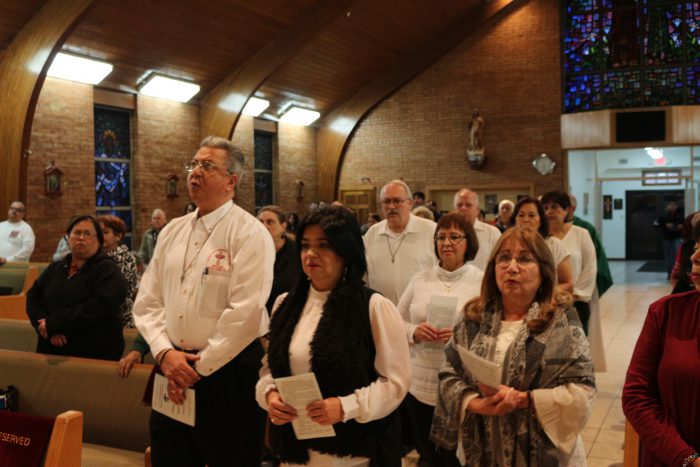 The Associates process in at the beginning of the Commitment Mass

Eagle Pass, Texas (population 28,834) is unique in that the town’s three Catholic parishes and two Mission Churches are all staffed by Missionary Oblates. In addition to Fr. Kulwiec, Oblate Fathers Jim Fee, Pauldass Selvaraj and Lawrence Mariasoosai serve the the entire Catholic faith community. The extraordinary cooperation between the Oblates and their parishes and missions has resulted in Eagle Pass being home to 110 Oblate Associates in all. According to Geri Furmanek, “The Oblates working with the laity brings this all about. I’m especially grateful to Fr. Pauldass Selvaraj for the good communication he maintains with the National Office.”

Ms. Furmanek also expressed gratitude to the local Associate coordinators for their continuing communication with her office. The coordinators, Dr. Carlos and Sandra Hernandez, Rosalinda González, Mario Pola, Diana Fernandez, Veronica De La Peña, and Claudia Casteñada were also among those who participated in video interviews over the weekend about their experiences as Oblate Associates. These interviews will be included in upcoming video programs to facilitate on-going formation of Oblate Associates in the U.S.

The Associates and Pastors after the Mass

Nearly 700 Associates are now active (many in areas where no Oblates are present) all over the U.S. Geri Furmanek says, “They are drawn by the opportunity to share in the charism and take the Good News to the most abandoned.  The Associates work beyond boundaries of parish or neighborhood, staying in communication about the needs and resources they encounter. I am grateful to the Oblates for their witness of availability and being close to the people.  This, in addition to their invitation to men and women to use their talents and goodness to bring the Good News to those on the margins encourages the people to become part of the Mazenodian Family.